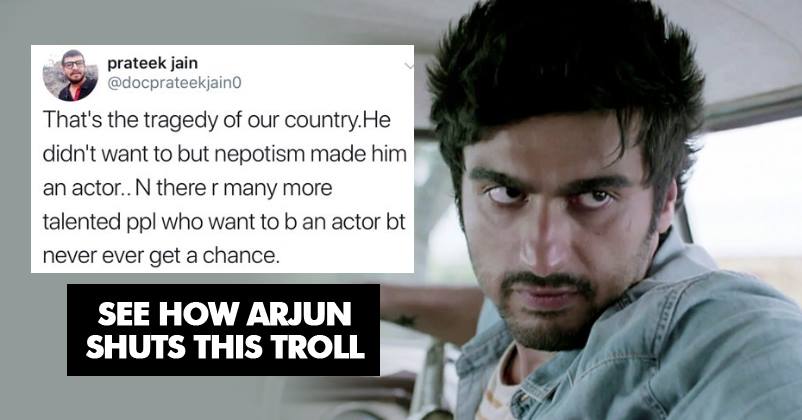 Arjun Kapoor is one of those starkids who have proved their capability and talent in a short span of time and shown the world that they deserve to stay in Bollywood not because of their filmy background but due to acting skills, hard work and devotion.

What’s more, he has also emerged to be a good human being and a great family man who stood like a pillar of strength for his father Boney Kapoor and half-sisters Khushi and Janhvi when they needed him the most. Overall, he is a good son, ideal brother, great human being and a brilliant actor with countless fans who always support him.

An active social media user, Arjun never lets anyone insult him and that’s why when a person lately tried to troll him by calling him a molester when Parineeti Chopra shared a poster from their upcoming film “Namaste London”, he gave a kickass reply to the hater and won the show.

Now once again a Twitterati made an attempt of mocking him by calling him a product of nepotism and the way Arjun dealt with him made the troller delete his tweet.

Recently Arjun had an interaction with Anupama Chopra and Rajeev Masand in which he disclosed that he never imagined that he would become an actor as he was overweight earlier.

A Twitter user lashed out at Arjun for snatching the chance of a talented person who could have become a successful actor in his place.

“That’s the tragedy of our country. He didn’t want to but nepotism made him an actor.. And there are many more talented people who want to be an actor but never ever get a chance. Sometimes I feel we are giving HAFTA to iski beti, uska beta, iski sister, uski niece because we don’t have choice.” 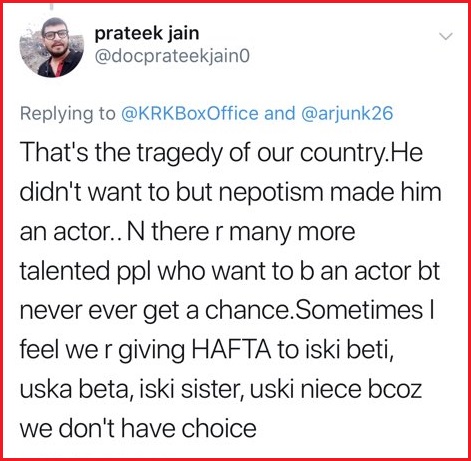 Arjun did reply to the hater and his reply won hearts on the micro-blogging site. He wrote,

“Hey Prateek u always have a choice. U can choose to not watch a film. Also we as actors don’t hold anyone at gunpoint forcing u to watch our work. We work hard put our film out there for all of u some work some don’t we accept the audience judgement & strive to entertain always.”

Hey Prateek u always have a choice. U can choose to not watch a film. Also we as actors don’t hold anyone at gunpoint forcing u to watch our work. We work hard put our film out there for all of u some work some don’t we accept the audience judgement & strive to entertain always. https://t.co/1UnF1tMJam

Twitterati loved Arjun’s reply and this is how they praised him:

Omg I think Kangana Ranawat had bitten him😂😱Thts y @docprateekjain0 got infection of her. He need serious treatment please someone take him to the hospital @JaySO_9 @borninocean @SamiaWasid

If nepotism is d word..den it is everywhere. A synonym apt is Reference. Every other is always referred by someone else for a job whether private or government. Der is also special recruitment drive 4 referral candidates. So y make such a noise? Stop targeting a certain section.

yesss! my boiiis stating facts here! you keep doing the good work baba,we know all the ups and downs you go through but still stand up strong…we love you and will always support you. pic.twitter.com/fG4bf2mSiI

Well said Arjun and it's talent what takes to ahead surname doesn't.

That's true arjun 😆 I don't know why people took this issue so seriously and made a word for it called 'nepotism' even star kids have dream and ambition to become whatever they want to but when they become actors people judge them what is there to judge 😫😫😫 pic.twitter.com/nrpIbZL7LM

Loved ur answer to it @arjunk26 !At times u need to give them back what they deserve!Just some jealous jobless ppl out there😡👊

And I think the word 'nepotism' was created by jealous and lazy people because they point out someone when they can't be perfect but when I see you , varun , janhvi , ranbir , alia , shraddha , parineeti or every other star kids on screen I feel that nepotism is not a matter pic.twitter.com/eEdVKFZkPh

Arjun u put it out so plain n to the point 👍🏽Best reply to a disgusting tweet just done to troll a respected person with out knowing Ur journey as Actor..!! @docprateekjain0 It’s so shameful that u haven’t even read the article & it’s so evident that u judged from a Headline!!!

Frankly not a fan of movies but really feel good when you all as an actor put you 200% to make every movie a possible success. Don't worry about people who complain about bad movies or acting. "Kuch to log kahenge..".
You earned a hats off with this reply.
🎩📴

I think you are here to stay in Bollywood for a long time. You have all what it takes to be lambi race ka ghoda. God bless you.

What is your take in this connection? How did you find Arjun’s reply?

First Look Of DC’s Joker Movie Is Out & Fans Can’t Wait To Watch It
BB 12: Sreesanth Threatens To Leave House After A Fight With Saba Khan. Watch Video