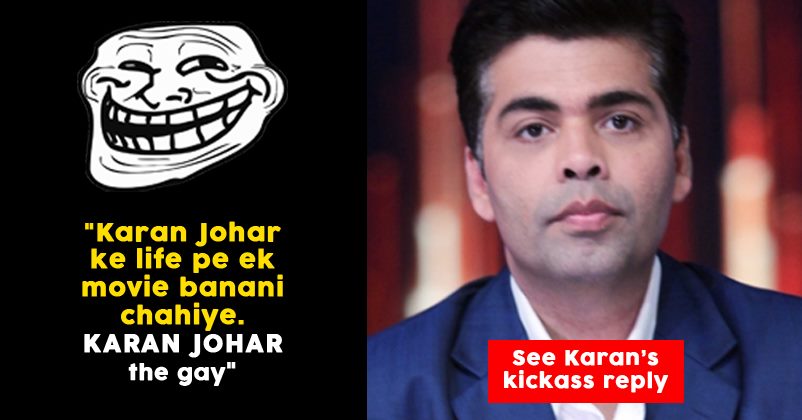 Karan Johar is one of those Bollywood celebs who are at the top spot in the list of trollers. Getting trolled is nothing new for KJo and most of the times, the haters target him for his s*xual orientation. Despite the fact that Karan has opened up about his s*xuality in his autobiography entitled “An Unsuitable Boy”, he finds himself at the receiving end of trollers quite often.

Recently, one such Twitter user tried to take a jibe at Karan by saying that a movie should be made on Karan Johar’s life and it should be titled as “KARAN JOHAR: the gay”.

Karan was in no mood to sit silent and bear the brunt of trolling so he hit back the troller in the most classy way and tweeted,

“You absolutely original genius! Where have you been hiding all this while??? Thank you for existing and emerging as the most prolific voice on Twitter today!!!”

You absolutely orignal genius! Where have you been hiding all this while??? Thank you for existing and emerging as the most prolific voice on Twitter today!!! https://t.co/5lxcPMjVif

It seems that the kickass reply given by Karan Johar was too much for the troller to handle and he deleted the tweet.

Earlier while talking in a chat show, Karan said that in the beginning, he used to get upset when he was trolled, later he become indifferent to it and now he gets amused by it.

He also states that it really doesn’t matter to him what people say about him but he gets angry when they start talking bad about his kids and he really hates it.

We also feel that these trollers should leave Karan Johar alone and should not target him at least for his s*xuality because it is his personal choice and his privacy should be respected.

Arjun Kapoor Did It Again, Trolled Katrina Kaif For Wearing Sunglasses At Night
Mira Rajput Mercilessly Trolled For Her Purse On Dinner Date With Shahid, Netizens Called It Tiffin