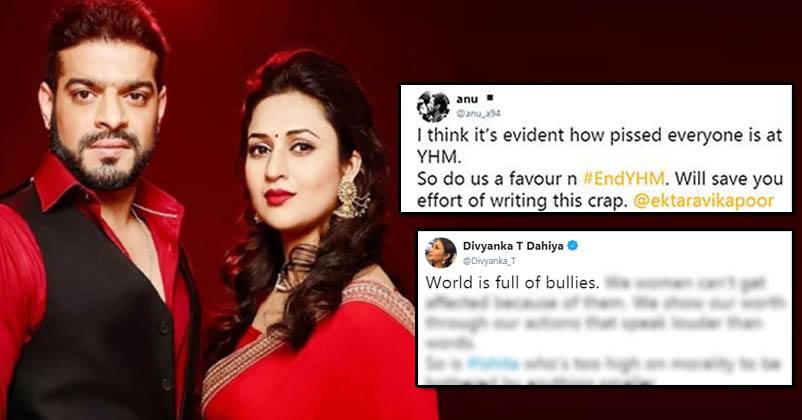 Star Plus popular show ‘Yeh Hai Mohabbatein’ has been counting in the list of long-running daily soaps on Indian television. So, the makers have to add so many twists and turns to keep their audiences stuck to the show. But, fans are outraged by the new turn and start giving suggestions to the lead actors Divyanka Tripathi and Karan Patel.

Lately, in the show, Ishita kills her own son Aditya to protect Roshni that made Bhallas and Iyers hate each other once again. After seeing so much negativity towards Ishita in the show, her fans started trending #EndYHM on Twitter which means End Yeh Hai Mohabbatein. The twist invited hate comments of the viewers as they think the makers are using ‘regressive contents’.

These are some of the hate comments posted by the fans of Divyanka:

Shagun telling Ishita that she made a mistake by entrusting her kids to her is the most pitiable thing ever! She's the same lady who ran away leaving her children to die in a fire! Ishita gave them another birth you fool! They ain't yours! #EndYHM

I think everyone has seen YHM at a certain point & to me this was the usp. Ruhi & her Ishimaa!
What has become of YHM is honestly appalling! #EndYHM pic.twitter.com/oT2uw9cfai

Please Know why and how you started the show..! 🙄🙄🙄Just because you had a good story in hand don’t keep showing us some idiotic repetitive story.! Your CVs have completely forgotten the roots of the show..! 🤷‍♀️🤷‍♀️🤷‍♀️🤷‍♀️#EndYHM pic.twitter.com/87vrFBF3I0

This is dead so please with all due respect #EndYHM pic.twitter.com/dDKbrWuApa

Fans of Divyanka messaged her asking to quit the show with hashtag #EndYHM. As soon as Divyanka noticed these trolls, she gave it back to the trollers by writing a strong message:

“World is full of bullies. We women can’t get affected because of them. We show our worth through our actions that speak louder than words. So is #Ishita who’s too high on morality to be bothered by anything smaller. Watch her/my upcoming episodes. #LongLiveYHM #YehHaiMohabbatein.”

World is full of bullies. We women can't get affected because of them. We show our worth through our actions that speak louder than words.

So is #Ishita who's too high on morality to be bothered by anything smaller.
Watch her/my upcoming episodes.#LongLiveYHM#YehHaiMohabbatein

“For once I’ll say it, my friends! Instead of hashtagging #endyhm stop watching it!! All stories will not go as you wish as an audience !! I love my TV audience I value your opinion But our creatives work with ratings and TV norms! This is for all show fan groups! Love and respect always.”

But, something didn’t go right and troller made Ekta Kapoor delete her tweet.

Ekta and Divyanka’s message show that they don’t give a damn to such trolls.

Malaika Gets Trolled For Wearing Swimwear. She Gives A Reply Trollers Deserve
Are KJo And Manish Malhotra A Couple? Manish Did Something That Made Us Feel So