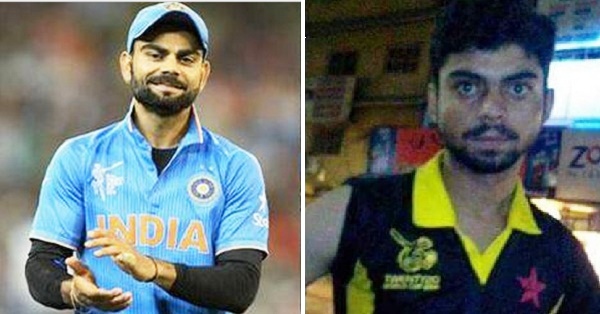 A Pakistani Youth has been flooded with several TV offers after his pics went viral on micro-blogging site Twitter. So what was special about his pics? He Is A Virat Kohli Look-Alike!!

Virat Kohli is one of the most famous cricketers and he is known not just for his game but also for his dashing looks. But as of now on Twitter, someone else is getting famous using the dashing looks of Virat Kohli.

A Pakistani youngster is getting all the fame of the world after he posted his photo on the micro-blogging site Twitter. His facial characteristics are so similar to Virat that people have started calling him look-alike of Virat. The photo went vital on the internet and it is getting shared by the fans from India, Pakistan and from all over the world. In fact, some are also saying that at last Pakistan has got their own Virat Kohli. As per the reports coming from Pakistani media, this youngster has also received some offers for advertisements.

Earlier, Ahmed Shahzad, who is considered as a talented cricketer with bright future was also termed as a look-alike of Virat on the basis of similarities in their facial structures. The name of the youngster, whose photo has gone viral on internet, is not yet known but in the photo, he was in the Pakistani team’s jersey, sporting stubble. The resemblance is striking but we leave it on you to judge, how much the Paksitani guy looks like our Virat Kohli. For the time being, he is enjoying all the attention on Twitter, due to his looks.

Watch The Ruthless UP’s Mafia Woman Runs A Tractor Over A Girl
MOST SHOCKING NEWS OF DECADE: SBI Deposited 95,000 Crore In This Poor Woman’s Account By Mistake