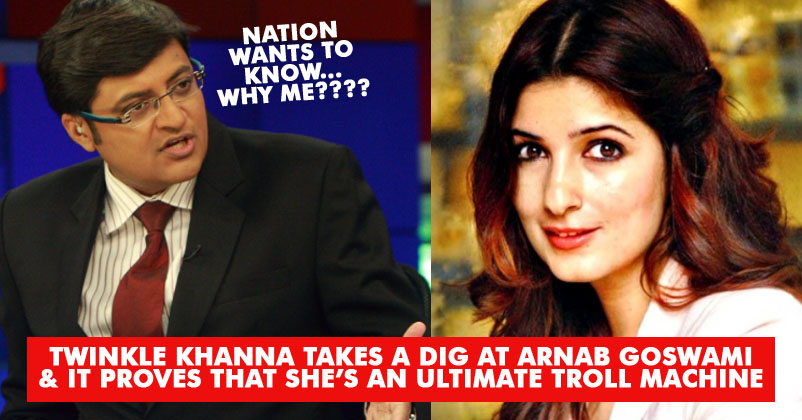 If you are an active netizen, you must be aware of the witty nature of Twinkle Khanna, former Bollywood actress, a writer, film producer and wife of actor Akshay Kumar, who never misses a single opportunity to take a jibe at others in the most epic and hilarious way. At the same time, she always expresses her views over the current and viral topics. Twinkle recently took to Instagram to troll Arnab Goswami, former anchor of Times Now and Republic TV’s co-founder. This all started with the display of Republic TV’s new promos in which Arnab could be seen writing to politicians including Congress Vice-President Rahul Gandhi and Delhi Chief Minister Kejriwal. As expected, these promos got much popularity and had largely been shared by the journalist’s fans. However, at one fell swoop, people slammed him for heavily criticizing the ones who were not in power instead of questioning those who are occupying the positions of power. Long time since we met, Mr Gandhi. This one's for you. #ArnabWithYouSoon pic.twitter.com/pdJM84423I

Twinkle Khanna didn’t seem to have liked Arnab’s letter writing and to take a dig at him, she posted a video on Instagram in which her cute daughter could be seen in the attire of Grim Reaper with a plastic axe in her hand. Mrs. Funnybones shared the video with caption, “Instead of writing letters perhaps Arnab should try incorporating these less ambiguous moves in his next video #CutCutCut.”

There has been no response of Arnab or his supporters over Twinkle’s post so far but one thing is certain, she definitely knows how to win it by means of wit and sarcasm!

What do you say? Share your views with regard to the article in the comments section below.

KRK Called Rajamouli A Chutiya Director & Compared Prabhas & Daggubati With Cartoons On Twitter
Nothing Can Describe “Bin Bulaye Mehman” Better Than This Hilarious Video & We Bet You’ll Relate To It!