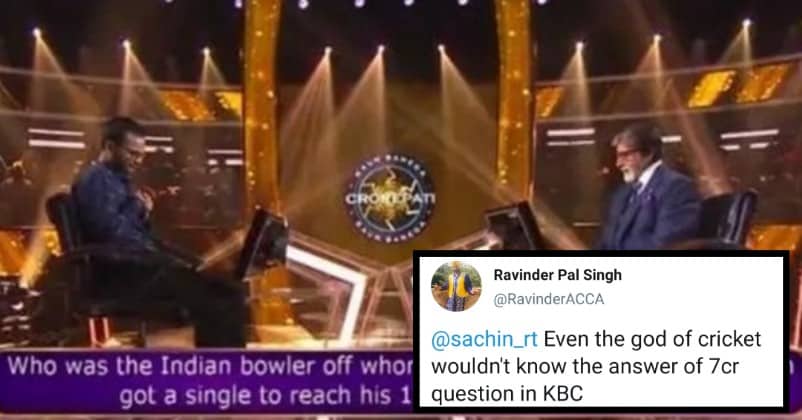 India’s most popular television quiz show Kaun Banega Crorepati is back with its 11th season hosted by none other than the Big B of Bollywood Amitabh Bachchan. KBC has a huge fan following among every age Shahenshah’s anchoring adds a charm to the show.

On Friday, KBC got its first crorepati of this season Mr. Sanoj Raj from Bihar. As we know in KBC several questions based on General Knowledge is asked from different fields to the players starting from sports, politics, history etc. Sanoj Raj played the game magnificently and became the first person to attempt the question of 7 crore.

A post shared by Sony Entertainment Television (@sonytvofficial) on Sep 10, 2019 at 8:30am PDT

The jackpot question was asked from the field of cricket Mr. Bachchan asked the question displayed on their computer screen, who was the Indian bowler off whom Australian legend Don Bradman got a single to reach his 100th first-class century?

The options were Baqa Jilani, Commandur Rangachari, Gogumal Kishenchand, and Kanwar Rai Singh. Well, the first crorepati of KBC wasn’t confident with his answer so decided to quit the game and walk home with 1 crore.

Mr. Bachchan asked Sanoj to guess the answer he gave a wild guess Commandur Rangachari which was wrong. While the correct answer was Gogumal Kishenchand. Desi Twitter instantly reacted to the tough question, wondering is the god of cricket Sachin Tendulkar and legendary commentator Harsh Bhogle is aware about this question.

Hello Harsha Sir,
I just wanna know being a cricket expert do you know the question asked by Mr. Bachchan to contestant to win 7 crore at KBC ?? @bhogleharsha @SrBachchan

@SrBachchan Sir i think that even God of cricket @sachin_rt would not be knowing the answer to this ₹ 7 crore question. Well played Sanoj. So patient and humble guy.

Pity Sanoj could not have phoned me as expert/friend since I knew the answer. And as a matter of fact, Kishenchand boasted about it all his life as if it was some sort of grand achievement!

remember my father telling me the story of Lala Amarnath making a surprise bowling change before Bradman's hundred hundred…do not remember the bowler though.

Nawazuddin Siddiqui Had A Fan Moment When Paulo Coelho Lauded The Actor
Ben Stokes Called David Warner A ‘F**King Prick’, Got The Most Sarcastic Reply From The Australians