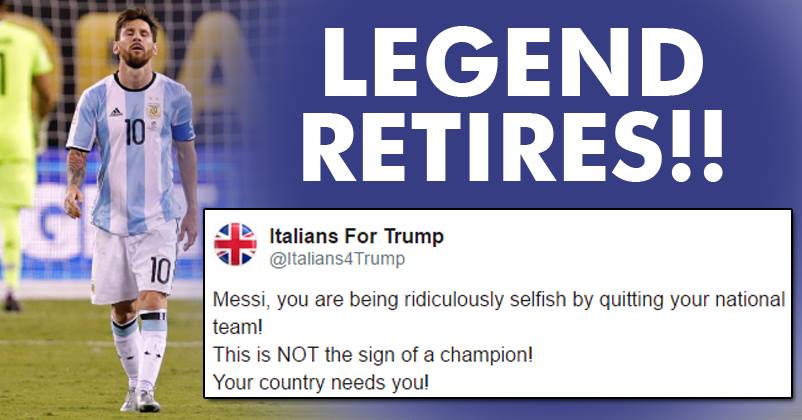 Lionel Messi, the forward football player of Argentina and Barcelona has announced his retirement, leaving all his fans shocked and upset. This announcement came after Messi missed a penalty shooutout against in Chile in the Copa America final.

Messi said, “For me the national team is over. I’ve done all I can, it hurts not to be a champion.” This hurt the football fans more as Zlatan Ibrahimović also announced his retirement from the UEFA EURO.

Messi may have won eight La Liga titles and four Champions Leagues with Barcelona but 2008 Olympic gold is his major International achievement. This loss to Chile finally broke Messi in view of the fact that it was the third continuous defeat of Argentina in finals.

Fans of Messi took to Twitter to express their disappointment because Messi’s announcement of retirement came as a rude shock to them and left the fans disheartened.

Messi retiring at an age when doctors just about start their careers. Sigh! #Messi

Messi should somehow ‘Copa’ with this hard time:

I just woke up and found the entire Football scene just changed.
Messi should somehow Copa with this hard time.

This user got emotional on Messi’s retirement:

Messi, you are being ridiculously selfish by quitting your national team!
This is NOT the sign of a champion!
Your country needs you!

The year of exits:

The year of exits! Messi announces his retirement from international football.

Someone please show Messi a photo of Shahid Afridi……

Someone please go and show Lionel Messi a pic of Shahid Afridi. We want him back

What a legend he is!

Messi retired to save people from GOT spoilers. Whatay legend!

Messi: "This ain't my cup of ArgenTEAna"

Kids these days I tell you…..

Messi… Made his haters happy again… Man is a genius 👏👏👏

None can blame him for the retirement:

Messi doesn’t need a trophy to prove that he’s the greatest:

Messi don't need a World Cup trophy in his career. He's already the greatest of all time as is

This is what Messi just needed before announcing retirement:

what #Messi needs before announcing his retirement pic.twitter.com/OmvO5XuMyG

Ashutosh’s reaction on hearing the news:

Ashutosh reacting to the news of #Messi retiring from international football.
. pic.twitter.com/XNha0l0bVb

Don’t forget to share your opinion with regard to Messi’s retirement in the comments section below.

Modiji Slammed Media And Presented The Actual Reality Of Ground Watering During IPL!
You Will Be Stunned To Know What These Afghanistan Players Did To This Kid After Chasing Him