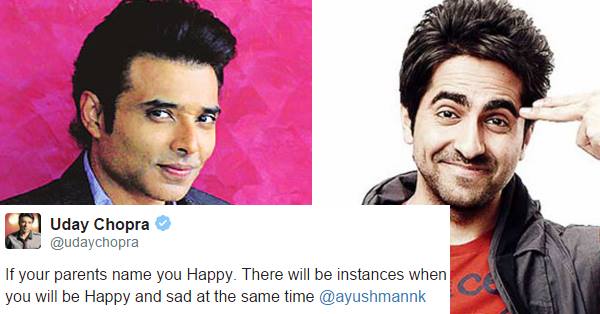 Twitter has become a great platform for conversation but sometimes, it gets weird and nasty. The same happened between two actors of Bollywood; one of whom is trying to settle his feet in the Film industry and the other has done just everything for establishing himself as a star but has failed miserably.

We are talking about Ayushmann Khurrana and Uday Chopra who recently had a conversation which will surely make you say WTF.

Ayushmann expressed his opinion about being happy:

When you're happy, you don't get tired. Being happy takes away all the attention.

And here was an over-intellectual tweet from an unexpected celeb:

If your parents name you Happy. There will be instances when you will be Happy and sad at the same time @ayushmannk

To which Ayushmann replied like a comedian of a C-grade Hindi movie:

And the conversation started getting funnier as well as weirder:

Ooh I have another bad one! @ayushmannk when Happy pees, his pee will also be Hap-pee#HappyPeesHappily #ShouldIStop ?

The reason of this type of conversation might be over-exercising and workout for nearly 4 long hours:

Ok I am off. I literally have a 4hr workout ahead of me. Loaded on low GI carbs. Now its time for pain!

Twitter users also seemed to be impressed with the last tweet made by Uday Chopra and out of curiosity, they asked:

@udaychopra is that the native apple watch workout app? How accurate is it? Coz its way off in measuring distance

@udaychopra Wow!.. that is some heartbeat rate.. 😀

So how you found this conversation? Do let us know in the comments section below.

This Speech By PM Modi Is His Best Reply To The Opposition Ever!
This Incident On The Sets Made Kangana Super Angry! Don’t Miss Out This Furious Video Of Hers!