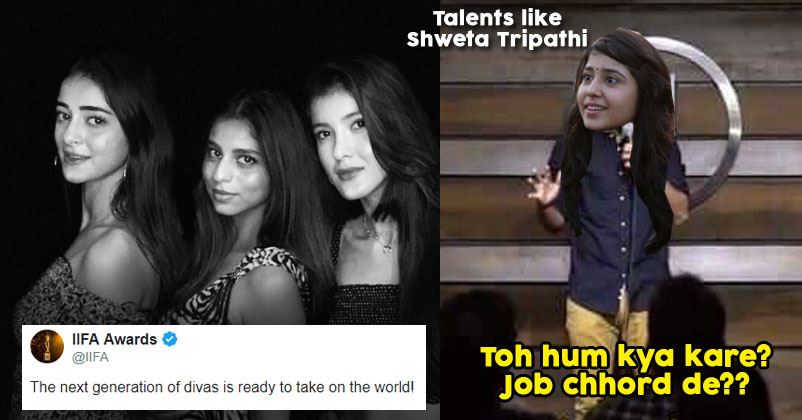 The term Nepotism came into limelight when Kangana Ranaut accused Karan Johar of it. The Bollywood industry took sides, and some supported it while some opposed it. Anyways, be it good or bad but few superstars today could only make it in the industry due to nepotism.

Few superstars today could only make it in the industry due to nepotism. They might not be immensely talented, yet they got opportunities due to the pressure and power of their relatives or family members. Every year one offspring of the important clans of the industry gets a break.

Recently, Student of the year 2 actress Ananya Panday the new girl on the block shared a picture on her social media handle with her two best friends Suhana Khan, Shanaya Kapoor. She captioned the picture as Charlie’s Angel with a hashtag Family Portrait. The picture was clicked by non-other than King Khan!


Well, hell got loose when IIFA retweeted the picture with a caption which speaks nothing apart from Nepotism. IIFA was praising Shah Rukh Khan, Chunky Pandey and Sanjay Kapoor’s daughter and called them the “The next generation of divas is ready to take on the world!”.

The next generation of divas is ready to take on the world! pic.twitter.com/MPebI6h7kp

Ananya made her Bollywood debut this year with Karan Johar’s Student of the year 2 and King Khan’s daughter was the face of Vogue Magazine in August 2018. Shanaya is yet to make her Bollywood debut. However, netizens were definitely not pleased with the caption posted by IIFA as they want the star kids to showcase their talents.

Where? Where? Where are the divas??where? You said there are divas..where? And why are these three trannies staring at us??

Go home iifa no one watches your awards anyway.. Talking about sane people's.

Let them be a diva you don’t need to speak for them!