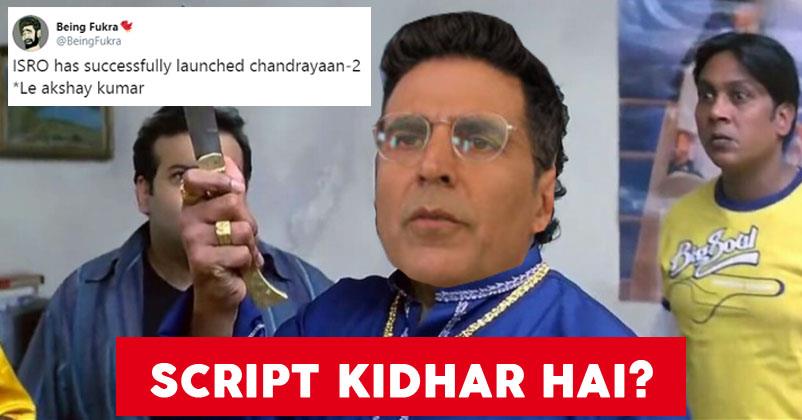 Akshay Kumar and John Abraham are the two Bollywood heroes who have taken the responsibility to do patriotic films especially those which are based on real incidents. Akshay’s last few films Airlift, Rustom, Toilet – Ek Prem Katha, Gold, Pad Man, Gold, Kesari as well as his upcoming film Mission Mangal are all reality-based patriotic films.

While John is also not far behind. Most of his last few films RAW – Romeo Akbar Walter, Satyameva Jayate, Parmanu – The Story of Pokharan and the upcoming film Batla House are all inspired by real events and are nationalism based film.

Seeing their patterns, now people are wondering who among them will get hold of the Chandrayaan 2 script first and make a film on it? Twitter is trending with hilarious memes on who is going to star in Chandrayaan 2 film.

Meanwhile Akshay and John fighting for the script of #Chandrayaan2 pic.twitter.com/c3q1XH5Rfl

Both can work together in the film…it can be called Swadesi Boyz 🇮🇳 https://t.co/vk7D9dBIQW

Every achievement for India is new script for Akshay Kumar

Movie on #Chandrayaan2 has been finalised

Lead Cast: Akshay and John (Both wanted a role, so the makers have turned it into a gay love story)

Me : Which is your favourite @akshaykumar movie ?
Mine is Mission Mangal.

Time Traveler : My favourite is #Chandrayaan 2: The Movie.

To jog your memory Chandrayaan 2 was successfully launched to its mission to reach the south pole of the Moon, on Monday. India is the first country to send a satellite on the southernmost part of the Moon.

Pakistan PM Imran Khan Gets Trolled On Twitter For His Promises To ‘Improve’ The Pakistani Cricket Team
Woman Tries To Buy Audi With Fake ₹11.5 Lacs That She Printed At Her Home