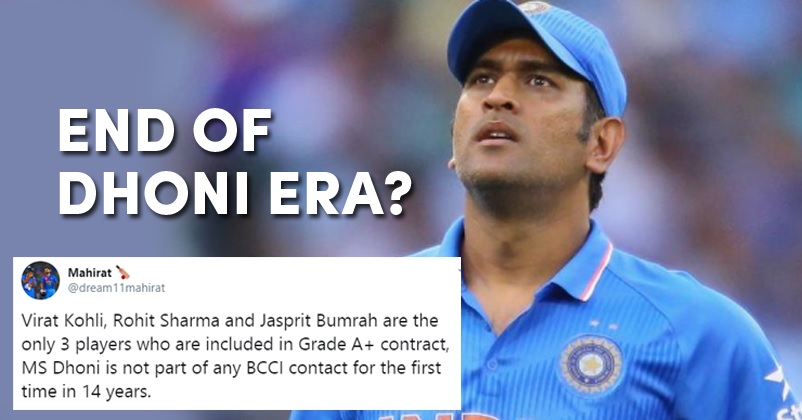 MS Dhoni is one of the most loved cricketers of India and his fans are presently very angry with Board of Control for Cricket in India (BCCI) as it has not included the wicketkeeper-batsman in its annual contract list. The rumours regarding Dhoni’s retirement have been doing rounds for a long time now but Dhoni has chosen to remain mum on this matter.

The last match that Dhoni played for India was the World Cup 2019 semi-final in which India lost to New Zealand. On the other hand, the head coach of the Indian cricket team, Ravi Shastri has said it many times that Dhoni’s future in the T20I cricket will very much depend on the manner in which he will perform in the Indian Premier League 2020.

The annual contracts of BCCI are categorised as A+, A, B and C. This year, Grade A+ contract worth Rs. 7 crore have been awarded to Virat Kohli (C), Rohit Sharma (VC) and Indian pacer Jasprit Bumrah.

While it is a reality that one day Dhoni has to retire, his fans are not able to accept that his name is not in the list and this omission from the contract list may be a signal to the captain cool to make a decision about his future.

However, this is how Dhoni’s angry fans reacted after not seeing his name in the annual contract list:

Virat Kohli, Rohit Sharma and Jasprit Bumrah are the only 3 players who are included in Grade A+ contract, MS Dhoni is not part of any BCCI contact for the first time in 14 years. #MSDhoni #ViratKohli #RohitSharma #BCCI #AnnualContract

Guys your @sachin_rt who play till at the age of 40 without any performance and you carry his contact till he was not ready for retairment.

Big mistake by not continuing MS Dhoni in senior team. If MS Dhoni is not fit just bcoz of his age factor then why Indian Army takes his service for duty ?? See failing Pant is getting chance & chance & success ful match finisher DK has been continue avoided. Who cares ??

Do you really think that indian team will win ICC trophies anymore without thala MSD? Without Dhoni u can only have Paytm trophies #bringbackDhoni @SGanguly99 @msdhoni @BCCI

Where is Maahi 😢😢🤔🤔
Stupid decision by BCCI and Ganguly @msdhoni @SGanguly99 @narendramodi I want you to give your opinion on this.

Not fair to a player who has given so much to Indian cricket. #MSDhoni

@msdhoni is all time best ever cricketer and a true gentleman.
If you @BCCI or egoistic overangry @SGanguly99 have any personal problem with him than do whatever you want to do. He doesn't require any grade from anybody.
He is the best forever. Mind It. #ThankYouMSD #MSDhoni

Everything is clear. We can't win any ICC tournament anymore. Please dhoni announce your retirement #thankyouDHONI

You can used @sachin_rt upto 40+ age and the player who is the most fitest in team india like @msdhoni you are going to remove him from contract shame on you @BCCI go home. @SGanguly99 #bcci #MSD

Dear BCCI, this is worst part. How can you ignore A Captain who won 3 ICC trophies for our country @msdhoni. Please give clarity whether Dhoni is coming or not. This should not be a mysterious thing any more. I know its Mahi Bhai's call, but this is giving unnecessary rumours.

David Warner Was Asked About Opening With Aaron Finch In World Cup 2023. He Had A Hilarious Reply
Sanju Samson Made A Weird Tweet After Getting Dropped From New Zealand Tour