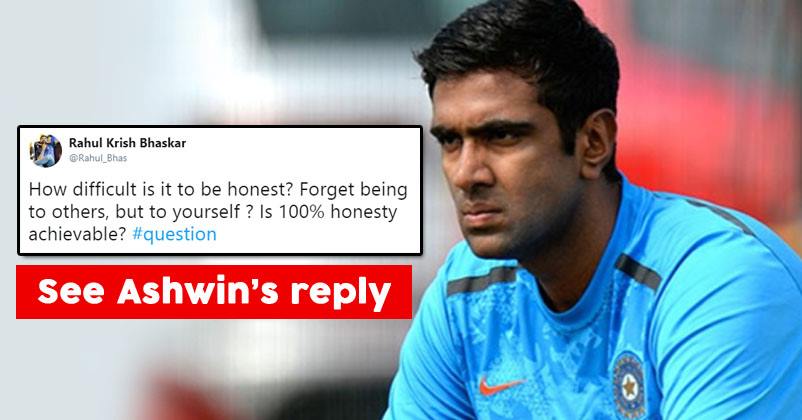 Ravichandran Ashwin was ruling social media during the Indian Premier League because of his mankading incident. In a match between Kings XI Punjab and Rajasthan Royals . The RR’s were in a good form and England’s wicket keeper Jos Buttler was smashing the Kings XI Punjab until Ashwin mankaded him.

The off-spinner was brutally criticised on social media by the fans and also from the cricket experts. But Ashwin was also supported as mankading is a legally permissible dismissal.

Many people believe Ashwin deliberately stopped so that Jos Buttlerwalks out of the crease and he could remove the stumps. Well, Ashwin was also seen warning Buttler to stay inside his crease.

Since then Ashwin has been a prime target on social media. Recently, a Twitter user questioned Ashwin about honesty. He wrote, How difficult is it to be honest? Forget being to others, but to yourself? Is 100% honesty achievable?

How difficult is it to be honest? Forget being to others, but to yourself ? Is 100% honesty achievable? #question

The 32 years old cricketer who is known for his witty and straight forward answers gave a hilarious answer to the Twitter user. Ashwin wrote, 99 per cent can’t be honest to themselves. One big joy of life is to stay in denial.

99 percent can't be honest to themselves.. One big joy of life is to stay in denial.😊😂

Ashwin was asked by another fan on Twitter that he should continue Mankanding. The off-spinner gave a savage reply and said “DEAL“.

Right. They say "Ignorance is bliss".

This is the TRUTH & honest confession 😀…

When did we doubt that 😜…

Continue Reading
You may also like...
Related Topics:Ashwin, Ashwin Trolled His Critic On Twitter & You All Will Love His Reply..!!, indian cricket team, Jos Buttler, Ravichandran Ashwin