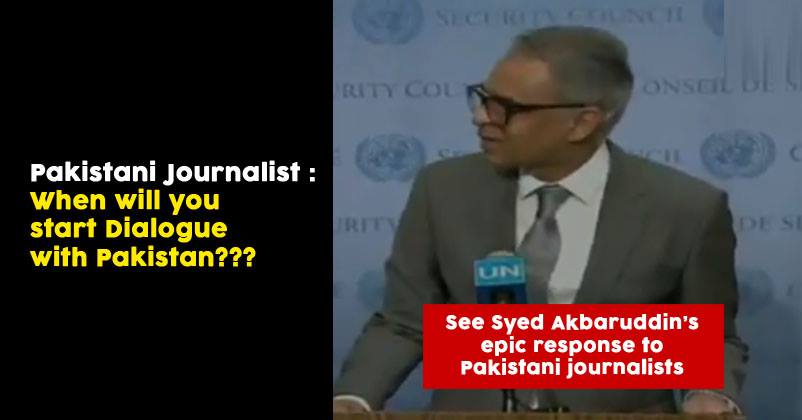 As per the reports of the Economic Times on 18th August, the United Nations Security Council had a closed-door meeting to throw light on India’s decision on scrapping Article 370. After the meeting was over UN ambassadors from different countries were interacting with the media.


Syed Akbaruddin gave an epic response, he firstly made it clear that anything related to Article 370 is totally an internal matter of the country and these have no external ramifications.

He further stepped out of his podium, walked to the journalist and shook their hands and said, so, let me start by coming across to you and shaking hands.

#WATCH: Syed Akbaruddin, India’s Ambassador to UN says,"so, let me start by coming across to you and shaking hands. All three of you," to a Pakistani journalist when asked,"when will you begin a dialogue with Pakistan?" pic.twitter.com/0s06XAaasl

Netizens are lauding the savage response of Akbaruddin:

Pak says, Muslims are not safe in India while our Ambassador is Muslim only who slapped them hard verbally.

Charming, composed, effective and firm @AkbaruddinIndia you made us proud and knocked it out of the park. Star performance https://t.co/1vlb9k9d88

This man hit every ball out of the park. 🇮🇳 #UNSC pic.twitter.com/KmlmHmeQXW

Syed Akbaruddin hits sixer out of the park on Pakistani journalist's question,

If life makes you an #Akbaruddin be this gentleman @AkbaruddinIndia and serve the nation.

Don’t be an #Owaisi

@AkbaruddinIndia Sir Brilliant reply to all questions posed. India is proud to have such an excellent diplomat.👏👏👏

I don't agree with this government but I am a fan of this diplomat. 👌

Man Gets ‘Employee Of The Month’ Award, His Sister’s revelation Leaves Internet In Splits
Remember The 9 Nurses Who Were Expecting At The Same Time? The Squad Has Delivered!