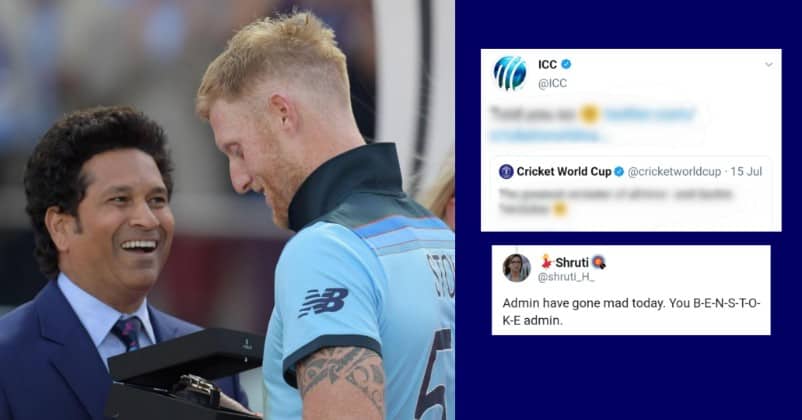 International Cricket Council irked the fans of god of cricket Sachin Tendulkar with their latest tweet. English cricketer Ben Stokes is at his career high rankings.

Stokes played a magnificent knock in the third test against Australia at the Ashes test. It can be said that Ben won the match against the Ashes single-handedly by scoring a smashing ton and took the responsibility on his shoulder to win the match when England were struggling at 286 for 9 as they were chasing 359.

Cricket fanatics are lauding the brilliant knock of Ben Stokes. However, International Cricket Council (ICC) retweeted a picture of Cricket World Cup featuring Ben Stokes and Sachin Tendulkar from the award ceremony of ICC World Cup 2019 which created a buzz for its caption, The greatest cricketer of all time and Sachin Tendulkar.

The greatest cricketer of all time – and Sachin Tendulkar 😉#CWC19Final pic.twitter.com/fQBmfrJoCJ

Cricket World Cup received flak from desi netizens for tweeting that caption. But, the official twitter handle of ICC decided to retweet the picture with the caption, told you so with a wink.

Tendulkar fans were furious and slammed ICC for sharing such disgraceful caption. Check out the enraging tweets:

Shall I talk about centuries??

Greatest cricketer of all time is @sachin_rt , rest everything starts after him in cricket world

Did you get it?

@ICC Is high on cheap English liquor..Told you so 😉

May be one day he may become the greatest cricketer of all time.
But he can't become "God of cricket" pic.twitter.com/1NfgqGJ04A

Which ch……a is in charge of your handle ?

I think Sachin deserves more respect than this.. In the late 90s he shouldered the Entire Indian cricket team on his Own..countless times.. The only difference.. There wasn't any Twitter during that time..

Dear ICC, why don’t you stop making fool of yourself?