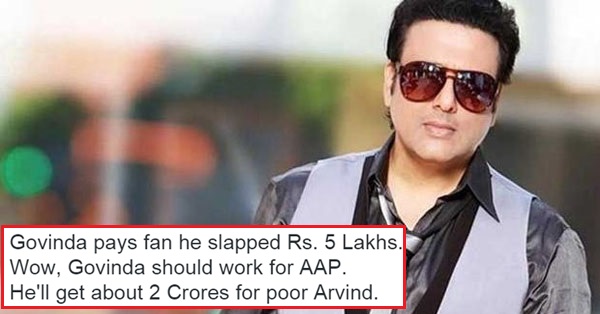 The Hero No.1 of Bollywood may have never thought that being angry in real life can be so costly. Govinda, the star of 90s and the King of comedy, who is not seen very much nowadays, has made an unconditional apology to his fan Santosh Rai for slapping him and also offered him Rs. 5 lakh as a part of apology.

The incident happened in 2008 on the sets of Money Hai Toh Honey Hai which was shot at Filmistan Studio, Mumbai. Govinda slapped Santosh as he was misbehaving on the sets, at that time Govinda was also a Member of Parliament.

Santosh’s case was dismissed by the Bombay High Court but Supreme Court decided to give the case a chance and scolded Govinda for not handling the matter with grace and dignity. However, the lawyers of Govinda have made claims that the video of Santosh getting slapped by Govinda is doctored and forged.

On Tuesday, Govinda was given two weeks time by the court to meet Santosh and come to settlement after which Govinda announced, “I have immense love and respect for my fans who also wanted me to apologise.”

As always, the social media didn’t miss the chance to express their opinion on the matter and this time too, they were quite funny:

Bhaijaan's reaction when judges asked Govinda to meet the man he slapped, within 2 weeks and negotiate a settlement pic.twitter.com/JVzcFFQon4

Govinda pays fan he slapped Rs. 5 Lakhs.
Wow, Govinda should work for AAP.
He'll get about 2 Crores for poor Arvind.

Long queues seen outside Actor Govinda's house, waiting to get slapped so they can also get 5 Lakhs

Actor Govinda , you may slap me as well. I will give you some discount. https://t.co/Sqowi1KfxQ

Govinda please come and slap me. I will even waive the apology. :-)) https://t.co/MLHsJxgU3V

The court should have also ordered the victim to slap Govinda in public as well pic.twitter.com/K7C5dYP3co

Share your opinion in this connection in the comments section below.