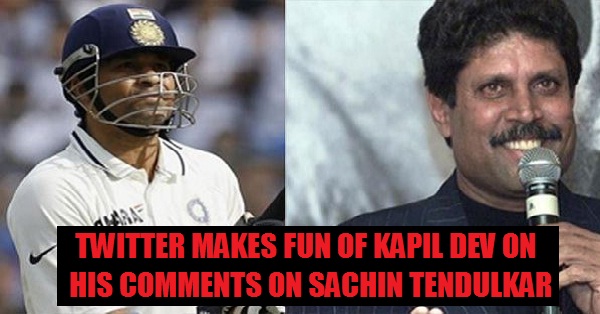 When The God of Cricket is criticized or in little harsh words given an advice, no cricket fan in India likes that, this has what happened recently. Kapil Dev the cricketing legend who was the first captain to won the Cricket World Cup in 1983 was mocked and trolled by Twitterati when he said, “Sachin Tendulkar did not justify his talent. He didn’t know how to convert 100s into 200s or 300s”.

Here are some funniest tweets of the day:

In that case I can also say to u Mr Kapil Dev u could hv bowled 25kmph faster !! Lekin hota toh tha nhi aapse 😂😂 Isliye just shut up 😄👋

Kapil Dev thinks – If Sachin had played like Sehwag, he would have been even more successful. Very easy to say sir…Wouldn't God know best?

but kapil dev ji, sachin tendulkar made 6 test double hundreds & the first one was with you as coach! he also made the first 200 in ODIs!

Amitabh Bachchan is not doing justice to his talent. He doesn't have 200cr movies. He should learn from Salman Khan – Kapil Dev

Kapil Dev has said something against 'God', when r the riots gona start?

NOT ALL OF THEM CRITICIZED KAPIL DEV, INSTEAD SOME PEOPLE CAME FORWARD IN HIS SUPPORT

Prima Facie I agree Kapil Dev's statement sounds offensive but if you read the entire article you can understand his expression!

We are Sachinists let's not behave like those stupid Thala fans who abused seniors! That was kapil dev's opinion we should respect it!

We heard it from Twitterati, now its time for RVCJ fans to speak about it. Let us know your opinion in the comments section below.

Even The Sad Ending’s Can Give You An Inspiration To Live. Here’s How
Chetan Bhagat Trolled Hilariously On Twitter For His Own Tweets On Historians