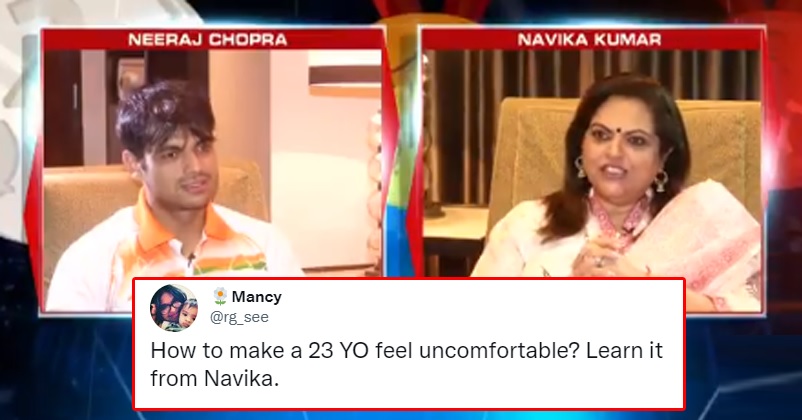 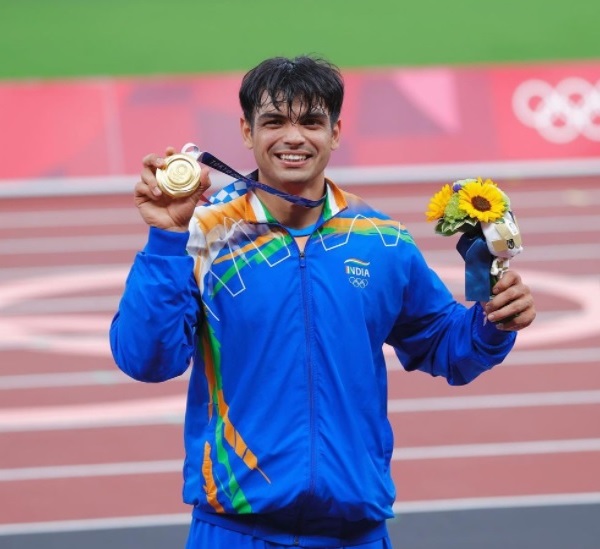 Neeraj Chopra became a household name after making history in the Olympics and some online users also predicted that now Bollywood would make a biopic on the athlete and even started a debate as to which actor would be suitable to play the lead role. However, many are of the opinion that Neeraj Chopra can play his own role in the biopic and there is no need for any other actor to portray him.

All the medal winning athletes including Neeraj Chopra were interviewed by various news channels but one interview of Neeraj Chopra is going viral for all the wrong reasons and it has left many Indians angry.

We are talking about the interview taken by Times Now senior journalist Navika Kumar. A video clip has been shared by Times Now on its official Twitter handle and it is evidently apparent that the entire focus of Navika Kumar is on talking about Neeraj Chopra’s fan following, especially among the females and how he feels being a superstar. 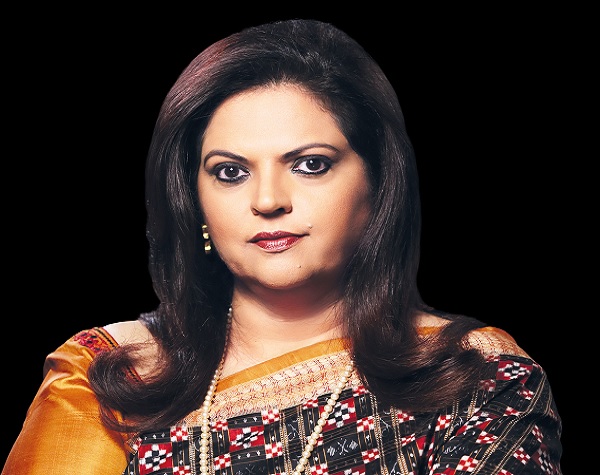 While the athlete kept on repeating that his focus is completely on his game and training, Navika Kumar wanted to know whether he has a girlfriend or not and she repeatedly laid emphasis on the same.

What made people angrier was the caption used by Times Now while sharing the clip on Twitter as it read,

No, I don’t have any girlfriend. My only focus as of now is sports: #Olympics #Gold medalist #NeerajChopra, tells Navika Kumar”

Here is the video clip that will leave you furious too:

No, I don't have any girlfriend. My only focus as of now is sports: #Olympics #Gold medalist #NeerajChopra, tells Navika Kumar. | #TokyoOlympics #NeerajOnTimesNowNavbharat pic.twitter.com/QRGvmVVeWT

Netizens were utterly disappointed with such low level of journalism and they slammed Navika Kumar mercilessly, calling her the aunt who is more interested in knowing Neeraj Chopra’s relationship status so that she can start gossiping on the same or begin finding a suitable match for him. Many others slammed her for not knowing what kind of questions should be asked to an athlete who has made the country proud by winning the gold.

You had the chance to meet the sportsman who created history in Olympics 2021 and this is what you ask him . Stop promoting this mentality, he is focussed let him focus on his game. Career comes first. Be sensible next time madam . 🙄

Exactly. Such an irresponsible question @navikakumar he's an army officer and an Olympic gold medalist. You should learn about ethics before asking him questions. Was this question worthy to have answered by him. He also became uncomfortable

Navika kumar is like Karan Johar of news media. She is asking same non sense questions as KJ asked KL Rahul and Hardik Pandya.btr qn wd be how many new kids u plan to recruit and train? #Navikakumar #NeerajGoldChopra #NeerajOnTimesNowNavbharat

Cringe! Pl have different questionnaire for someone like him. Olympians are focused & to ask such stupid questions seems like 'mazey lena'.
So much to learn from his ways. To achieve something glorious, 1 has to live it. How? Ask Neeraj! Or watch his DD interviews. @navikakumar

How to make a 23 YO feel uncomfortable? Learn it from Navika.

Bull Sh*t journalism. Send someone more capable and professional to interview a Gold medalist of India. And ensure to ask appropriate questions in the interview as kids and families will be watching together.

First rule of Journalism : if someone is uncomfortable don't dig more about personal life it's unprofessional imagine someone asking you about your relationship status and not sport you play. If he says no just move on

Well it's NAVIKA KUMAR, did you expect sensible journalism from her? 😂😭 pic.twitter.com/tGt17rC516

Such a weird question to #NeerajChopra, #Olympicsindia gold-medalist by #Navikakumar during a congratulatory interview on his return🤷
And, it's highlight as some big revelation (🤨), coming from a mainstream #media channel indicates standard of #journalism in #India nowadays🤷

They're all asking him ridiculous questions like getting married, his girlfriend, and making him uncomfortable on television instead of asking him about his training, challenges, and exposure to the game.

Woww!! That's some way to waste his precious time. And to think anybody there didn't stop her from asking these questions is even more ridiculous.
Do limit these sh*tty questions to bollywood people and their children. 🙏🙏

She is that nosy aunty in every wedding who goes behind every gud looking guys and strikes a conversation to find out whether he is single, only to gossip with others abt the same 😛

Some people cannot see the success of a man or woman without asking his/her relationship status . Arey bhai he is bringing laurels to India , let him to that .Doing marriage or being in relationship isn't an achievement , that's a personal matter . Jab maan chahega karega

What an interview. He is very much clear of not getting into the superstar syndrome. He has the clarity and the focus. Absolute commitment. Its pure devotion. Cheap journalists please don't pollute him. #NeerajChopra #Olympicsindia #OlympicHeroesOfBharat #Navikakumar #karmyogi #

@navikakumar let him focus on his career. What kind of Q's you're asking to him!! He makes 130 crores Indians proud. He feels uncomfortable, but besides this you constantly ask this unnecessary Q!!
Don't stoop so low. A big shame on your journalism.

Hopefully these journalists will understand what type of questions they should ask to an international athlete instead of such rubbish and not make him uncomfortable on the national TV or the news channels should hire more deserving candidates who actually know what they should question and what not while interviewing the legends.

After Calling Men Hockey’s Bronze Bigger Than WC Win, Gautam Gambhir Trolled For Another Tweet
Sachin Admits Having Anxiety Issues, Says He Could Not Sleep On The Game’s Eve For First 12 Yrs