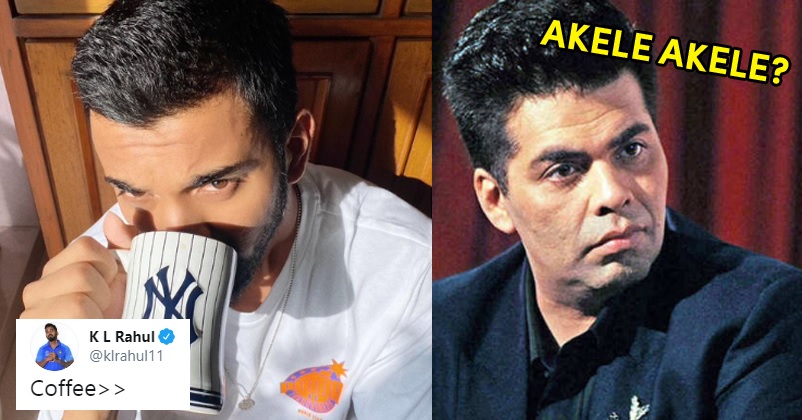 KL Rahul, the young Indian cricketer, is enjoying life at the moment as he is doing great on both the fronts – personal and professional. However, there was a time when his life turned upside down and nothing seemed to be going his way.

KL Rahul’s bad time started when he and his teammate Hardik Pandya appeared on the chat show Koffee with Karan Johar hosted by Karan Johar. On the show, Hardik Pandya made some insulting comments towards the women community and after the episode was aired, there was a huge uproar against the two cricketers. As a result, BCCI suspended both of them and enquiry was ordered even after they issued apology.

The good thing was that things got normal soon and they both were back on the cricket fields. Recently, KL Rahul took to the micro-blogging site Twitter to post a photo of himself drinking coffee with the caption, “Coffee>>”.

This is the pic:

This gave enough fodder to Twitterati and people started trolling the cricketer, reminding him of the last time he had a cup of coffee on the chat show.

The coffee with karan is more expensive than your career 😂

Ha ha, shall we call karan to brew one for you

It's good you are drinking coffee at home alone..the last time u had a coffee outside with someone it became very expensive for you🙃🤪

Coffee is great but koffee is toxic.😅

Please stay away from Coffee 😏

KL Rahul has been performing superbly with the bat in the shorter formats and he is also keeping the wickets for the team in a good manner. The skipper Virat Kohli, head coach Ravi Shastri and the team management seem to be pretty happy with KL Rahul’s performance as a wicketkeeper also and most probably, he is going to replace Rishabh Pant in the team for the future tournaments.

KL Rahul was supposed to lead Kings XI Punjab (KXIP) in the IPL 2020 but the league got postponed on account of the COVID-19 outbreak. Earlier KXIP was led by Ravichandran Ashwin who is now a part of Delhi Capitals.

What is your reaction on KL Rahul’s photo?

This Is What Bhuvneshwar Kumar Advices To Upset Fan Whose Girlfriend Is Getting Married
Virat Kohli Tries To Troll KL Rahul Over Coffee Pic, Rahul’s Heartwarming Response Wins The Show