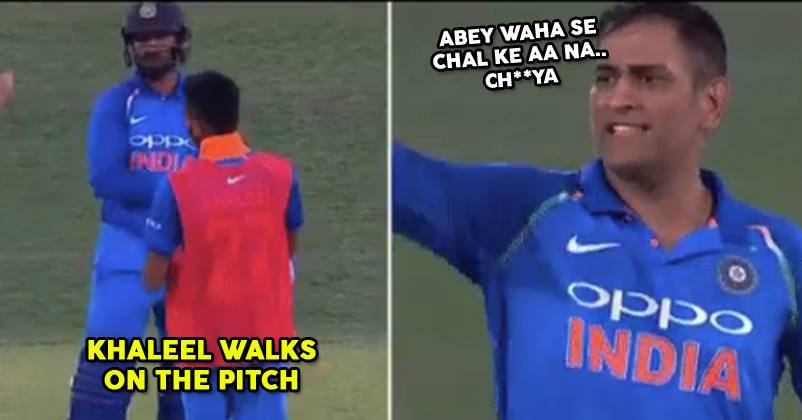 It’s time to celebrate for the Indian cricket fans as team India made a comeback in the ODI series by defeating Australia in the second ODI and leveling the series by 1-1. In the match that was played at Adelaide, Australians gave a target of 299 to India which was achieved by the guests with four balls remaining of the last over.

The Indian captain Virat Kohli led from the front as he scored a century and the former captain MS Dhoni proved that he is still one of the best finishers of the world. If you remember, Dhoni was heavily slammed for his slow batting in the first ODI but today he gave a perfect reply to his critics by scoring an unbeaten fifty and staying till the end, ensuring his team’s victory.

However in this match, we also came across a new aspect of Dhoni’s character and the Internet has already gone crazy about it. Dhoni is considered as one of the coolest cricketers of the cricket fraternity as he knows how to keep himself calm and composed. But today, Dhoni lost his cool and abused Khaleel Ahmed for walking on the pitch.

Khaleel went on the field for serving water to the batsmen and in the process, he walked on the pitch which made Dhoni angry.

Twitter is saying that Dhoni has used the C-word (CHU**YA) for Khaleel; however as there is no sound, we can’t say anything with confirmation.

When Dhoni scolded Khaleel for carrying water over the pitch

Khaleel deserved this bashing from Dhoni. Absolutely lethargic display by Khaleel Ahmed on field. What an innings by MSD.👏🏼 #INDvAUS #AUSvIND pic.twitter.com/uQOCJxfSq6

Dhoni once said " bsdk " to Manish Pandey, he is suffering to get place in the team.

Just to inform, the players are not allowed to walk on the pitch as it may damage the pitch and create problems for the batsmen.

What according to you Dhoni said to Khaleel? Let us know.