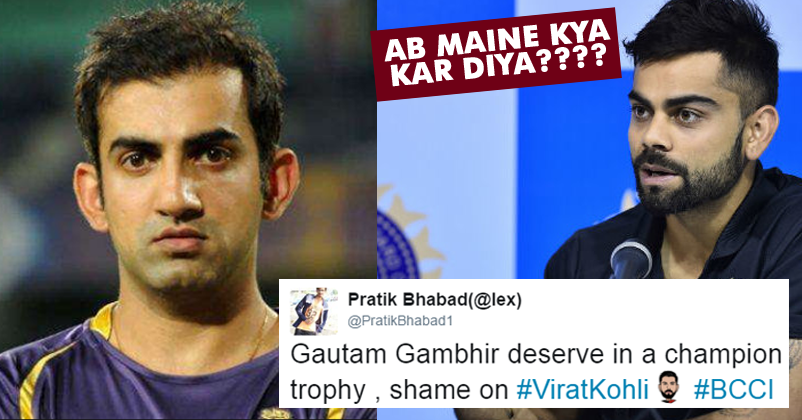 BCCI on 7th May announced the list of players representing India for the Champions Trophy 2017. While the cricket lovers are super kicked for the championship, they are not happy as Gautam Gambhir is not included in the team, despite performing well in past many matches. So the Gambhir lovers took to twitter to show their solidarity towards him and trolled Captain Virat Kohli & BCCI.

Couple of years back, Gambhir and Kohli were involved in tiff and since then, they don’t prefer talking to each other. Now, cricket fans believe that it is because of this controversy that BCCI has omitted Gautam’s name; do you think it’s true? Check out how Twitter is blaming Virat Kohli for this! BCCI remember world cup 2011, the man who took indian team towards the win nd you ignored him.Bring back #GautamGambhir #ChampionsTrophy2017

Meanwhile, Gautam Gambhir has a totally different opinion and thinks that T20 performance should not be considered while selecting ODI team. In an interview, Gautam Gambhir was quoted as saying,

“T20 runs should only be a criteria to get selected for a T20 side. The moment you start picking players in the one-day format by their T20 performance, then you are giving your domestic 50-over competitions absolutely no relevance.”

We’ll be missing Gambhir in the Champions Trophy for sure especially after seeing his performance in IPL 2017.

Dangal’s Director Gave An Epic Response To Baahubali 2’s 1000 Crores Club! Read It Now!
This Comedian From TKSS Has A Huge Role To Play In Making Ranbir Perfect For Sanjay Dutt’s Role!