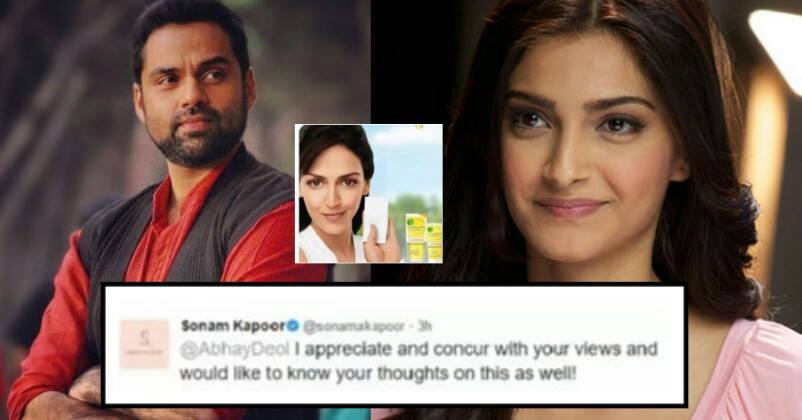 Abhay Deol did not spare anyone in his latest Facebook posts against the most relevant issue of racism.

He listed out the top Bollywood stars and called them out for endorsing fairness creams and promoting racism. He did not even spare his Aisha co-star Sonam Kapoor and that did not go down too well with Sonam. She took to her Twitter and expressed that even Esha Deol(Abhay’s sister) was also a part of a brand of fairness cream. Sonam further clarified that she did the advertisement 10 years before when she did not know about its outcomes. Abhay Deol maintained his calm and motivated Sonam to take her star power positively and bring a change.

However, Sonam got trolled by many Twitter users for her post on Esha Deol and there was no stopping to it.

.@AbhayDeol I appreciate and concur with your views and would like to know your thoughts on this as well. pic.twitter.com/O1I845MnnP

Only if @sonamakapoor would have taken 5 mins to read your views instead of wasting her time looking for a pic to prove You wrong:.

After reading all this, a rather irritated Sonam Kapoor took offense on being trolled and here’s what she tweeted:

After so much of ongoing drama, Sonam decided to delete all her tweets. This became another reason for Twitter users to have good laugh.

Looks like Abhay Deol’s post is creating the much-needed reaction we are expecting out of it. We hope the stars take it seriously and stop promoting fairness creams.

Transformation Alert! Sushant’s 8 Pack Abs & That Too In Just 8 Weeks Is Giving Us Fitness Goals!
KRK Uploaded A Pic Of Himself & Asked “Who’s This Handsome?” Rahul Mahajan Trolled Him Badly!