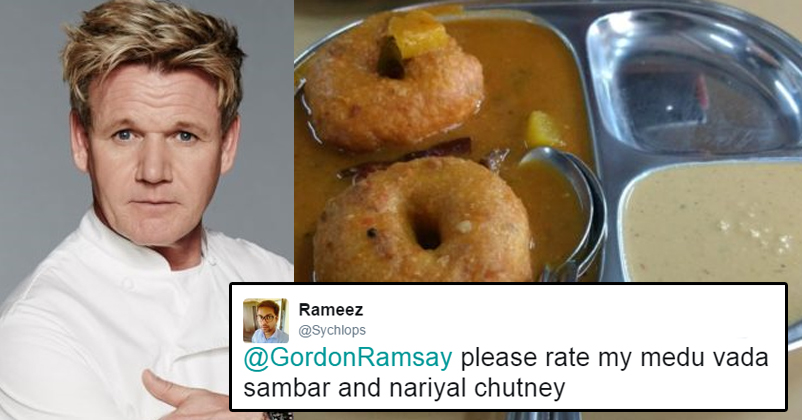 Gordon became a global chef in 2005 after his show “Hell’s Kitchen” aired on television and since then, he has a reputation of insulting people and their food items. What’s more, he is keeping the tradition alive on the micro-blogging site Twitter as well. A Twitter user from Mumbai, @Sychlops, uploaded an image of his food which was medu vada sambhar and nariyal chutney and asked Gordon to rate it. Here is the tweet from @Sychlops, “please rate my medu vada sambar and nariyal chutney”

True to his reputation, Gordon came up with an insulting remark, calling the south Indian dish as the food from prison. Gordon tweeted, “I didn’t know you can tweet from prison”

I didn't know you can tweet from prison https://t.co/rxrPPBonff

Meanwhile, another user joined in trolling:

@Arezno If you don't mind, I'd rate it as Homeric pic.twitter.com/qmZhPTi37v

It didn’t go well with many Indians as for the North Indians, this food item is a tasty snack while for almost all of the south Indians, it’s their morning breakfast. So as a result, Gordon got trolled by Indians and that too, in a classical style.

How dare you insult our food ?? Go to Pakistan

It tastes better than your half cooked steak:

Had Gordon Ramsay been to South Indian prison? When and why?

When did u return from prison? and why where u put in a south Indian jail 😂😂

Every cuisine that you're ignorant about is not from prison!https://t.co/LlJI65sJD7

You are so mean!

@Sychlops U r so mean. its delicious dish of southern India and half India eat. Explore yrself out of yr little mean world.

If you know how it tastes, you'll either learn how to cook it or commit a crime to get into that prison.

However, the Twitter user, @Sychlops, because of whom the whole matter started was happy with the fact that the South Indian food had been acknowledged by an International chef.

Dal Vada has never been acknowledged on SM by a famous foreign chef. Contest over

What do you have to say about this? Share your views in the comments section below.