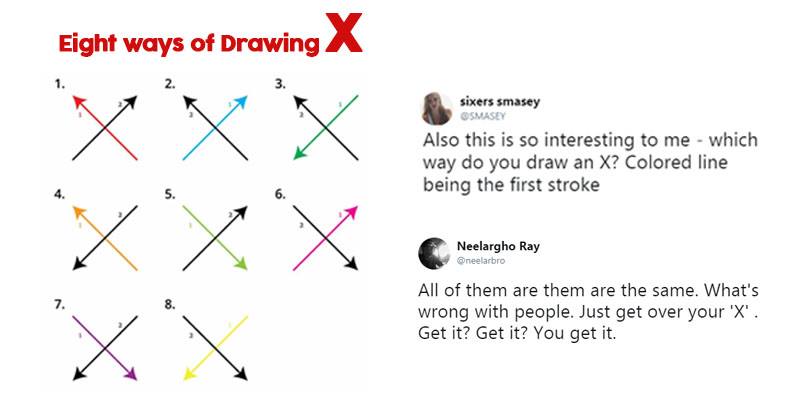 There is no doubt that social media platforms are sometimes really weird places to be and once again we are banging our heads against the wall because one Twitter user has decided to educate everyone about the number of ways in which alphabet “X” can be written.

Twitter user with the handle @SMASEY took to the micro-blogging site and posted 8 methods to draw “X”, asking people which way they draw it.

Below are the 8 different ways to write “X” according to her and she shared them with caption, “Also this is so interesting to me – which way do you draw an X? Colored line being the first stroke” 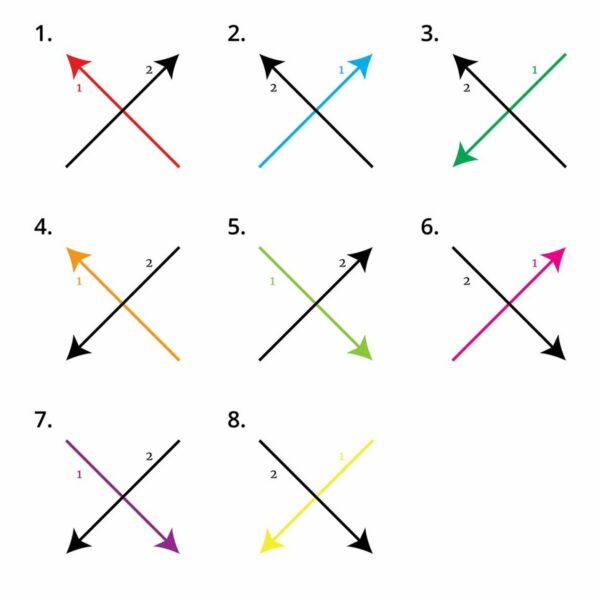 Also this is so interesting to me – which way do you draw an X? Colored line being the first stroke pic.twitter.com/a0WTl8WT7P

In another tweet, she also told about the methods by which Americans and people from UK draw an “X” as they are taught this way. Her tweet read, “General consensus is that Americans do 7 & 8 while UK does 5 & 6. Probably how we were taught. Not sure about other countries”

General consensus is that Americans do 7 & 8 while UK does 5 & 6. Probably how we were taught. Not sure about other countries

I mean seriously? Do you even remember someone teaching you how to draw an “X”? And even if someone taught you, will you be drawing it in the same manner all the time?

The Internet has gone crazy as people are trying to figure out how they draw an “X” and some are also expressing their opinion about those who use methods other than 7 and 8.

All of them are them are the same. What's wrong with people. Just get over your 'X' . Get it? Get it? You get it. https://t.co/QKpL1iQE8p

Depending on if you’re right or left handed it should be 7 or 8. What kind of sick person draws an X any other way https://t.co/tBqkafRUD5

People who draw bottom to top are also the ones that put their toilet paper on the holder the wrong way.

Really? you need to get a life it could be life changing

In math only in Japan…none of the above. Taught to make an X by using 2 parentheses in opposite directions like this-> )(

7.
If you do not draw it like #7, there is something wrong with you.
OK, maybe 8 if you are left handed.
But even left handed people write from left to right.

I'm a 7 as well, but I did not realize there were different ways in writing an X.

Pretty sure 1-4 are for people who can’t figure out how to Tweet.

So what is your method of drawing an “X”?