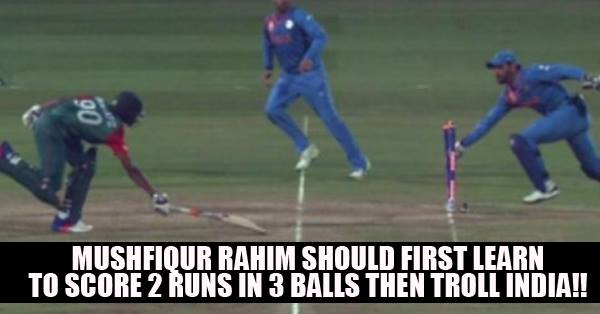 As if Bangladeshi fans didn’t stir enough controversy when a morphed image of M.S. Dhoni was used to degrade Indian Cricket team. But now Bangladeshi wicket-keeper Mushfiqur Rahim went much further and mocked Indian Cricket Team’s after its loss against West Indies in the Semi-Final of T20 World-Cup. Well, it was just a matter of time Mushfiqur Rahim started trending on Twitter and got trolled by Tweeple on massive scale.

When Life gives you Rahim, Become Rahim Chacha of Sholay but not Mushfiqur Rahim !!

Mushfiqur Rahim, no more traveling in your rickshaw. you crossed the limit.

SHAME On Such International Players..!!

Mushfiqur Rahim has become famous for his deleted tweet than for his cricket performances. What a shame for a sports person.

Bangladesi Batsman MUSHFIQUR RAHIM should learn to score 2 runs in 3 balls before trolling against INDIA…..#LoveYouBleedBlue

After facing such heat and criticism on Tweeter, Mushfiqur Rahim posted a TWEET apologizing about his act and the words he used.

However, Mushfiqur Rahim’s apology was not widely accepted by Twitterati as what he did was offensive and it surely doesn’t suits an International player.

What are your thoughts on the matter. Let us know in the comments section below.

Continue Reading
You may also like...
Related Topics:Twitter Users Trolled And Criticized Mushfiqur Rahim After His Tweet Of Celebrating INDIA's Loss