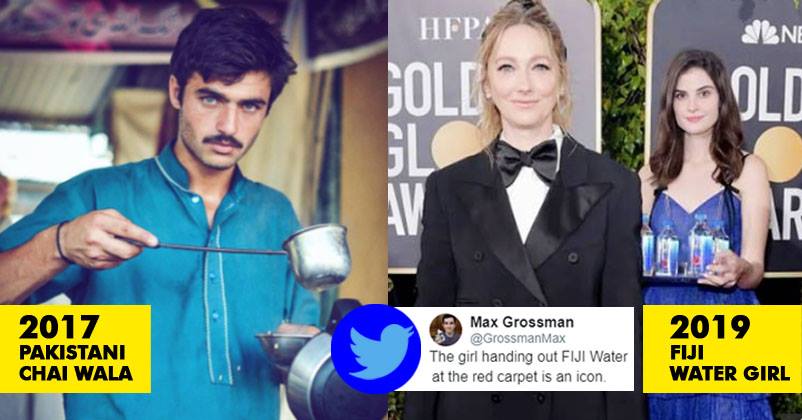 Golden Globe Awards happened recently and like every time, the event was attended several Hollywood bigwigs. However, there was something different and more this time. The red carpet celebrity pictures which went viral quite soon had something unavoidable and it soon became a rage on the social media.

A Fiji Water girl – as the people popularly called her was seen photobombing every celebrity pic while holding a tray of Fiji water bottles.

Identified as model Kelleth Cuthbert, the girl soon became a meme topic on Twitter and several hilarious and relatable memes were created about her.

Take a look at the compilation of most hilarious ones and have a blast.

Don’t know bout y’all but 2019 just begun and we have the PHOTOBOMBER OF THE YEAR. Fiji water girl is a fckng mood 👏🏻👏🏻 pic.twitter.com/gkP3SGYvYT

ME: new year new me!

She got mad because I got all the attention… Chillax, Nics. #GoldenGlobes pic.twitter.com/R2lvKYsrdS

I am literally going to photoshop the Fiji Water girl into every picture I take from now on #GoldenGlobes #Fijiwatergirl pic.twitter.com/QaNaFGB2TJ

Fiji Water Girl takes photobombing to a whole new level! She featured in too many photos at the red carpet.

I have included the PNG file I made, you're welcome! #GoldenGlobes #IdrisElba #JimCarrey #tarajiphenson pic.twitter.com/FKDGpHGah7

The girl handing out FIJI Water at the red carpet is an icon. pic.twitter.com/7YQ5illghM

I don't who the miserable woman is in front of her, but the Fiji water girl is a breath of fresh air . . . Her life I'll change after tonight pic.twitter.com/71VayPV73v

Isn’t that hilarious? 2019 has started with a bang for Twitterati.

Continue Reading
You may also like...
Related Topics:Golden Globe

Elon Musk Tweets A Hilarious Meme About Aliens,Twitter Is Loving It.
Kartik Aaryan Might Be Dating This Actress.Will Sara Ali Khan Be Heartbroken?