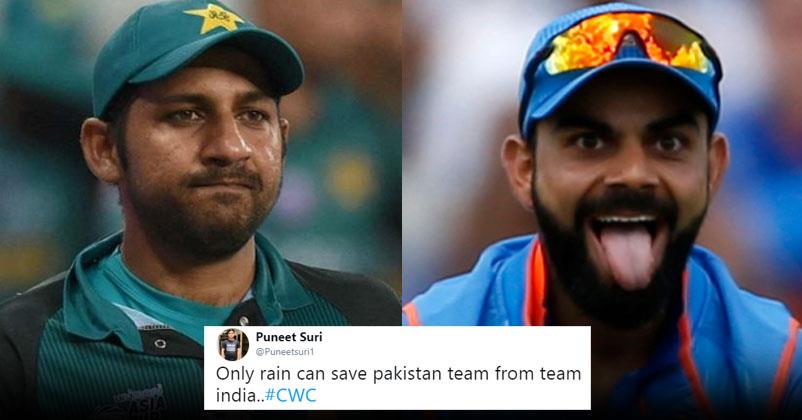 India started on a great note in the World Cup 2019. After it defeated Australia in the very first match, Indians are very hopeful. The last match against New Zealand got canceled because of the rain and people were quite disappointed. But the most awaited match India will be playing is versus Pakistan on this Sunday,16th of May.

There are a lot of memes, jokes, and videos going around the internet since the day coincides with Father’s day. Well, the match will be the judge of that. People are quite disappointed because of the rain problems going in London, they are praying that this does not happen on this Sunday.

Twitter is all hazed up because of the match and people are predicting what will be the course of the match. Some also went on to say that, the only things that can save Pakistan from defeat is rain. Have a look :

This Sunday, the best way for Pakistan to avoid defeat in the match against India is to pray for rain, which is likely to spoil the game. Otherwise, Pakistan's defeat is sure.

There is possibility that Pakistan will have a happy memory in this world cup. And may gain points against India

There is plenty of chance for rain and match being washed out.

Only rain can save pakistan team from team india..#CWC

If the rain does not come in between and everything goes well, this match is going to be epic!

Sonali Kulkarni Slams Critics For Critising Her For Playing Salman’s Mother In Bharat
Father’s Day 2019: Binge Watch These 7 Movies With Your Dad