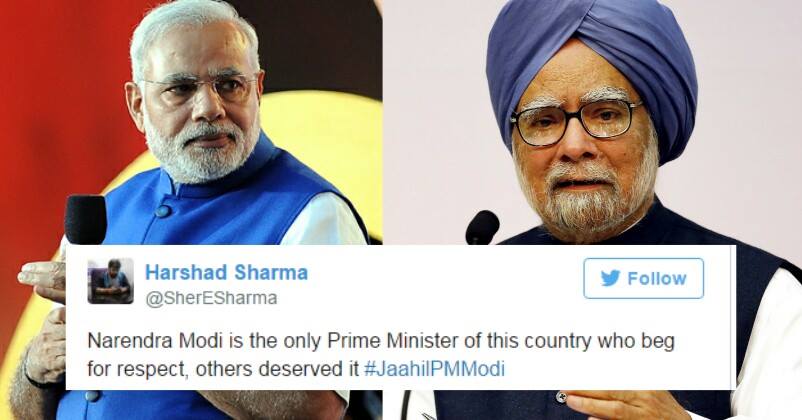 PM Modi on wednesday, took a dig at his predecessor Dr. Manmohan Singh by making some disgraceful remarks. He said people should learn from Manmohan Singh how to bathe in bathroom wearing a raincoat. His remark was to point out how Manmohan Singh remained unscathed even after all those corruptions took place right under his nose.

The reason kept aside, who was the person referred to kept aside, what should be considered is the fact that a PM speaking in such a disgraceful manner is just a sign of disrespect for the Parliament. After those remarks, there is simply doubt as to why people went on to ask their own PM to prove his educational qualifications. Twitteratis were not going to let go off their PM for making such horrendous remark. Subsequently, #JahilPMModi became the top trend on twitter as people bashed PM Narendra Modi in every possible way. Here is a collection of a few tweets that are just the perfect replies to PM Modi.

Too hot to handle!

When illiterate and #JaahilPMModi spoke to students on climate change… irony died a thousand deathspic.twitter.com/81JDfYUvwt

Whole BJP talks about patriotism nd this guy from the party walked during national anthem. Such shame#JahilPMModi pic.twitter.com/3UZZw2xYxy

Right on the money!

You are a ugly orator Mr. Modi.
Thanks to your upbringing.#JaahilPMModi

Hearing his raincoat, kutta remarks, u can't see much difference between PM & the cheap abusive trolls he follows on Twitter !#JaahilPMModi

Narendra Modi is the only Prime Minister of this country who beg for respect, others deserved it #JaahilPMModi

Dear #NarendraModi Ji
Respect democracy & be a gentleman at least in house.U need 7 births to be the peon of great Manmohan Ji#JaahilPMModi

The hardest slap for Narendra Modi’s indecency came from Dr. Manmohan Singh himself. Manmohan Singh preferred ignoring the senseless remarks made on him instead of stooping low to reply them. Perfectly exemplies what decency is expected from a PM!

I do not want to speak: Former PM Manmohan Singh on PM Modi's remarks on him in Rajya Sabha pic.twitter.com/d99QI1X9uf

In his pre parliamentary speech last year PM Modi had stated, “In a democracy, discussion and debate should happen in this temple of democracy. Every subject should be discussed in detail. We hope that there will be a positive outcome of this debate that will help the poorest of the poor.”

Either PM Modi has forgotten his own words or he has forgotten how to behave inside a temple. A PM represents a country and pretty surely India doesn’t deserve to be represented in a disgraceful manner. Do let us know whether you feel this was against the code of conduct or it was just another political hype in our comments section below.

Mark Zuckerberg May No Longer Be The Boss At Facebook, Might Be Forced To Leave
In Spite Of Living In A Luxury Hotel, The U-19 Team Doesn’t Have Money To Eat Food