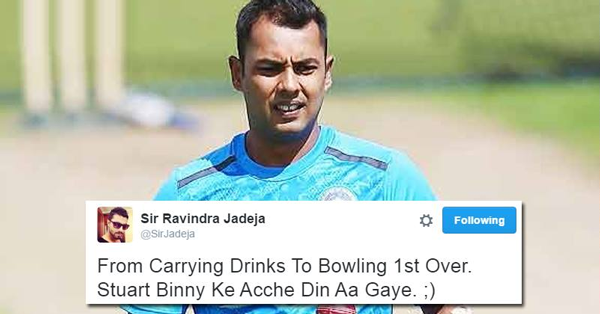 Royal Challengers Bangalore doesn’t seem to be doing well this Indian Premier League as they have dejected fans due to poor bowling performance. However, one thing can definitely be maintained that IPL 2016 is marked with several quite incredible and awesome catches.

Stuart Binny, the all-rounder of Royal Challengers Bangalore has been the latest player to join the list with an amazing catch against Mumbai Indians. As we know that Stuart Binny often has to face criticism since his wife is more good-looking and beautiful than him, the cricketer was lately appreciated but in a mocking style by a Twitter user who runs the parody account of cricketer Ravindra Jadega.

And Mayanti Langer Binny, Stuart’s wife, won the Internet with this kickass reply: We all need an awesome partner like Mayanti, don’t we?

Do share your views about Mayanti’s reply to Stuart’s trollers in the comments section below.

Aishwarya Rai Trolled On Twitter In An Epic Way For Her Purple Lips At Cannes #LMAO
After Manoj Prabhakar And Sangeeta Bijlani It Is Ravi Shastri Who Is Infuriated With ‘Azhar’! Know Why!