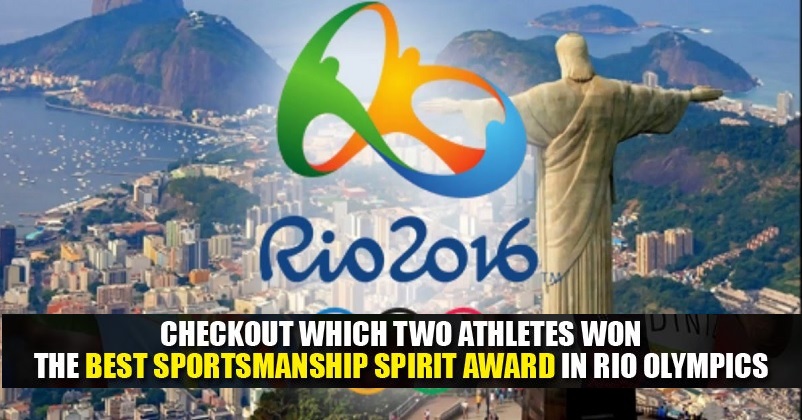 Rio Olympics is now over, but everything that had happened over the last 20 days or so is still a fresh in our minds. Records were broken and more than that, Hearts came closer. Olympics is the greatest sporting event in the world where almost 11,100 athletes from more than 200 countries participates in around 306 events and hence, the pressure to win a medal for your country is always high. People will always expect something out of you and their expectations are justified to some extent. But at the end of the day, out of so many fierce competitors, Winning is not the pride, participating along with them is. The moment of pride is when you give your performance while representing your country. And that is the time, when you payback a portion of debt that you owe to your country. Athletes try their best to earn medals for their respective countries, but sometimes they do ignore their goals and go ahead to achieve something bigger than just medals – Maintaining The Spirit Of Sportsmanship. Olympics is not about winning, but teaching you a better way of living by maintaining Brotherhood, SisterHood or ‘Humanhood’ (If there is a word like that).

Remember the news that we shared where two female athletes helped each other in completing the race ? Yes we are talking about Nikki Hamblin and Abbey D’Agostino who fell together in the middle of the race and later on helped each other to finish the crossing line. And for their brilliant sportsmanship spirit, these two athletes received International Fair Play Committee Award given to them during the Closing Ceremony on 21 August 2016.

These awards are generally given to those athletes who serve as a bright example for upholding the spirit of sportsmanship during the Olympic Games. Both of these athletes were competing against each other with various other athletes in a 5,000 KM Race where Nikki Hamblin slipped and fell on the ground. Following this, Abbey D’Agostino who was right after her followed the same fete as she collided with her in no time. However, she managed to get up, but instead of running for medal and fame, she decided to help Nikki Hamblin stand up on her feet.

They both began to race again, but during the collision Abbey D’Agostino had twisted her ankle which made her running uneasy and painful. And then, at that very moment Nikki Hamblin chose to stay by her side rather than chasing for medal. And this is how, they both helped each other to finish the race and won the hearts of millions by displaying the perfect example of good sportsmanship.

After the Closing Ceremony in Rio, Hamblin said: “I think it’s very special for both Abbey and myself. I don’t think either of us woke up and thought that that was going to be our day, or our race, or our Olympic Games. Both of us are strong competitors and we wanted to go out there and do our best on the track. She also added “I was on the ground for too long to get back up and catch on to the pack. So then it becomes about finishing the race, and finishing the race well. I am so grateful to Abbey for picking me up, and I think many people would have returned the favour … Once you are on the track, there is a mutual understanding of what it takes to get there.”

These 10 Highest Paid WWE Superstars Will Make You Want To Start Your Career In The Ring!
This Sweet Twitter Conversation Between R.Ashwin And His Wife Gives Us Relationship Goals