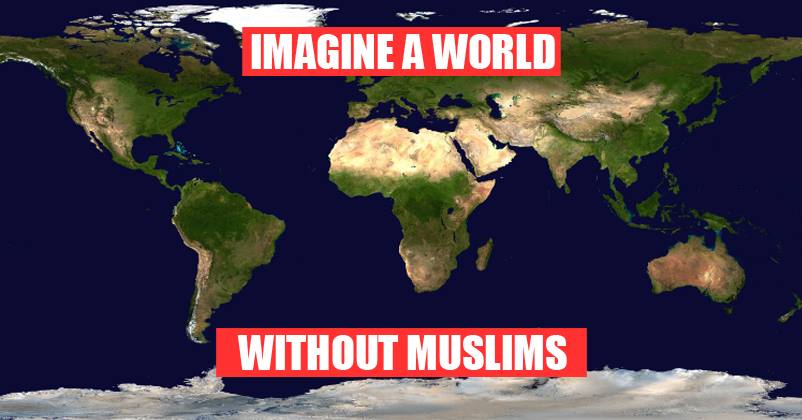 In one of the speeches, Donald Trump, the nominee for president of United States called Muslims as a ‘Threat’ and also said that they must be banned. Not only there, but all across the world, Muslims are treated with suspicion. But, don’t these Muslims have a right to live? Don’t they have a right to be treated equally?

Well, after the Paris Attack of November 2015, a Muslim man stood near the Place De La Republique and he had an interesting placard in his hand. On the Placard, it was written “I’m a Muslim, but I’m told that I’m a terrorist. I trust you, do you trust me? If yes, hug me.” After reading this, there were several people who hugged him.

However, not to forget the fact that, it created a lot of ‘Islamophobia’ there. Every time, there is some attack, it is Muslims who are looked upon with suspicion.

This situation gave rise to a meme ‘Imagine A world without Muslim’ which became extremely popular since then. Now, Ian Bremmer, a Political Scientist and a University professor highlighted an important point that overall, Muslims account for just 0.00625%. Moreover, he had a brilliant response to the meme. He actually imagined a world without Muslims and the post went viral in no time…

Well, the professor highlighted all the inventions made by Muslims, right from toothbrushes to hospitals. Want to see it? Have a look…

Yes, lets imagine a world WITHOUT MUSLIMS, shall we?

Without Muslims you wouldn’t have:

It was a Muslim who realized that light ENTERS our eyes, unlike the Greeks who thought we EMITTED rays, and so invented a camera from this discovery.

It was a Muslim who first tried to FLY in 852, even though it is the Wright Brothers who have taken the credit.

It was a Muslim by the name of Jabir ibn Hayyan who was known as the founder of modern Chemistry. He transformed alchemy into chemistry. He invented: distillation, purification, oxidation, evaporation, and filtration. He also discovered sulfuric and nitric acid.

It is a Muslim, by the name of Al-Jazari who is known as the father of robotics.

It was a Muslim who was the architect for Henry V’s castle.

It was a Muslim who invented hollow needles to suck cataracts from eyes, a technique still used today.

It was a Muslim who actually discovered inoculation, not Jenner and Pasteur to treat cowpox. The West just brought it over from Turkey

It was Muslims who contributed much to mathematics like Algebra and Trigonometry, which was imported over to Europe 300 years later to Fibonnaci and the rest.

It was Muslims who discovered that the Earth was round 500 years before Galileo did.

Just imagine a world without Muslims. Now I think you probably meant, JUST IMAGINE A WORLD WITHOUT TERRORISTS. And then I would agree, the world would definitely be a better place without those pieces of filth. But to hold a whole group responsible for the actions of a few is ignorant and racist. No one would ever expect Christians or White people to be held responsible for the acts of Timothy McVeigh (Oklahoma bombing) or Anders Breivik (Norway killing), or the gun man that shot Congresswoman Giffords in head, wounded 12 and killed 6 people, and rightly so because they had nothing to do with those incidents! Just like the rest of the 1.5 billion Muslims have nothing to do with this incident!

So, in short, we would be nothing without Muslims, don’t you agree? Do let us know your thoughts in our comments section below!

War Of Words In Mid-Air In Indigo Flight Over Food!
Here’s The Evolution Of Royal Enfield Since 1893.!!