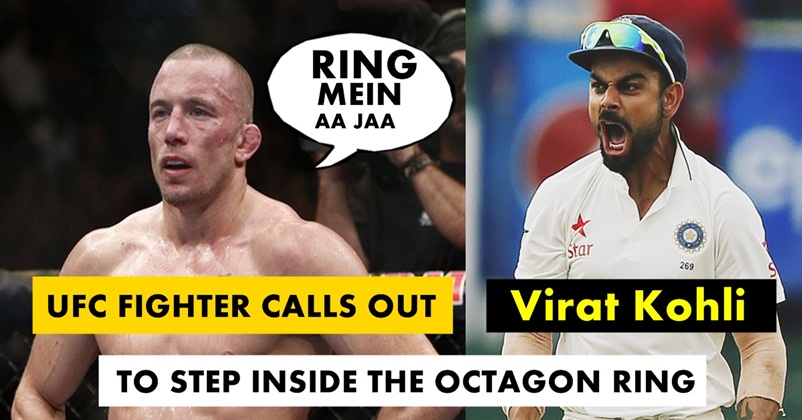 The T20 match will be played in USA. Before the match the Indian team is enjoying their time in the USA. The team was seen enjoying the dinner, the Indian team tweeted a picture of the dinner. The players of the team made a visit to the American Airlines Arena, Miami Heats home court. They also spent some quality time with the Heat players— Tyler Johnson and Briante Weber. It looks like team India is enjoying their stay in the USA. BCCI tweeted this picture of Indian team players along with Tyler Johnson and Briante Weber, the NBA players. The UFC Welterweight legend Georges St-Pierre is quite the fan of the Cricket. Virat Kohli quickly accepted his proposal and said he would love to step inside the octagon. Virat said that he is interested in learning the MMA moves, looks like he’s a UFC fan too. Virat tweeted this… The legendary Welterweight fighter Georges St-Pierre is all set to make his return. He had started the USADA process to prepare for his UFC comeback after three years away from the game. The legend is expected to make his return at UFC 206 which happens to be in Toronto. St-Pierre’s opponent has not been named as of yet, but it’s being suggested that he would fight the likes of  Nick Diaz or even middleweight champion Michael Bisping. But he is more interested in fighting the current Welterweight champion Tyron Woodley. This fight would surely attract a lot of audience and would sell the PPV. Tyron Woodley became the new Welterweight champion after defeating Robbie Lawler at UFC 201. Tyron Woodley said in an interview,

“I got a text message from Georges St-Pierre saying that he’s in on the fight,” He is interested in fighting Pierre as the fight could result in his big payday. However nothing is official yet.

I Just Got The Answer To – Why Do Bad Things Happen To Good People?
This Woman’s Story On Last Day Moments With Her Dog Will Make You Cry!