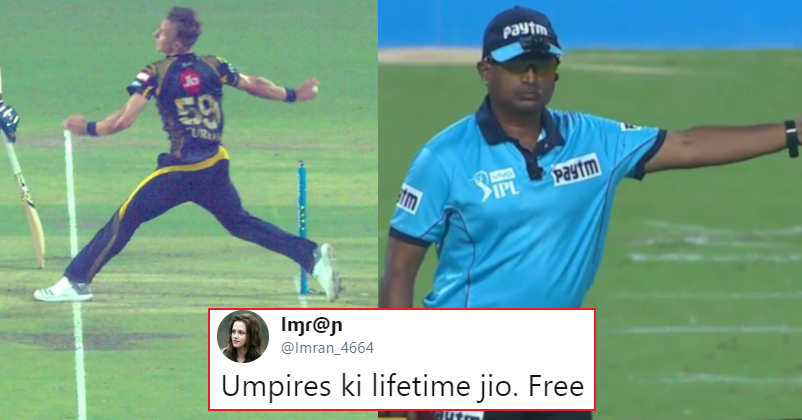 Looks as if there are too many umpiring errors in this IPL season. Even today, we saw a big error in the match between KKR and Mumbai Indians. MI defeated Kolkata by 102 runs, but what’s being discussed more on social media today is faulty umpiring.

It was because of the umpiring mistake today that Mumbai Indians got a free hit on a wrong no-ball. However there was not much impact of this free hit as batsman could score only single on free hit. This happened in the 16th over; even though the delivery was a legal one, umpire declared it as a no-ball.

Curran and Dinesh Karthik conveyed this to the umpire but he didn’t overturn the decision. Twitter is unhappy with this decision; they are trolling Umpire for the same and also asking BCCI to take some strict action

Umpiring was the worst in today's game. #KKRvMI

Is it ipl or Drama. Lot of decisions favouring Mumbai Indians. No balls given mercilessly, Chris lynn run out Seems like fixed. @mipaltan and @KKRiders whatever may be don’t cheat real Cricket fans.

A no ball for a correct delivery?? Last over to spinner?? And now @KKRiders will continuously loose wickets and get all out for a mere 150 or so and @mipaltan will win by a large margin.. Fully fixed match.. Worst part is it seems like nowadays even umpires are sold out #MIvsKKR

Acc to rules 'First landing of front foot' should be consider for A valid or No Ball. Tom curran's foot skated only after first landing yet a No Ball given. Is the Umpire sold out in a very secretive amount? @bcci @mipaltan @KKRiders #InsaafChahiye #2RunGhato #UmpireKoHatao

shame on Umpire to give No Ball. Blinded Umpire. Poor IPL Umpairing.

Now, people want BCCI to take strict action against the umpire. What do you feel? Shouldn’t 3rd umpire intervene in such cases as it can be very decisive. However luckily this no ball had no impact on the match because Mumbai Indians convincingly won the match but what if Mumbai Indian would have won this match by only one run? Then this no ball would have been talk of the town.

10 Highly Creative Posters That Were Spotted In The Hands Of Cricket Fans. You’ll Love Them
Shashi Tharoor Questioned Kohli’s Decision For Skipping Test Cricket. Got A Reply From BCCI