The Board of Control for Cricket in India (BCCI) has sent a young Indian team to Sri Lanka for playing the 3-match ODI series and 3-match T20I series as the senior players such as Virat Kohli, Rohit Sharma, Ravindra Jadeja, etc. are in England at the moment. The Indian cricket team went to England to play the finals of the World Test Championship which they lost to the Kiwis and now they will be playing 5-match test series against England. Shikhar Dhawan has been appointed as the skipper of the Indian squad for the Sri Lankan tour while Bhuvneshwar Kumar will be his deputy.

During the flight to Sri Lanka, Shikhar Dhawan took to his Instagram account and posted a groupfie (group selfie) in which Dhawan and Yuzvendra Chahal, Kuldeep Yadav and Prithivi Shaw were seen while Suryakumar Yadav photobombed the image as he was seen at the back. 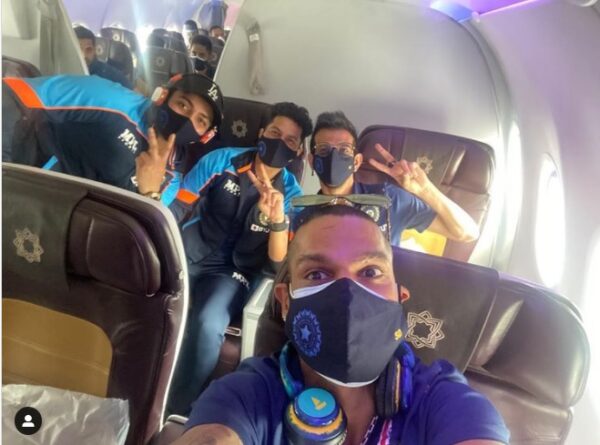 Shikhar Dhawan shared the pic with the caption, “Next stop, Sri Lanka!” with an airplane emoticon.

Soon fans of Shikhar Dhawan started giving their best wishes to the cricketer and the team for their tour. However the Mumbai batsman Suryakumar Yadav posted a funny comment, telling his skipper that his eyes are on him and also asked Dhawan to find him (SKY) in the photo. SKY’s comment read, “Have my eyes on you skip. Find me in that pic 😂”

Shikhar Dhawan also has a pretty good sense of humour and his perfect reply proves it once again. Gabbar tells SKY that he is able to see him, adding that Suryakumar Yadav’s eyes have scared him and also promises that he won’t click without him the next time. The tour to Sri Lanka is pretty important for the young players as with their performance in this tour, they will be able to prove themselves worthy of being selected for the T20 World Cup which is going to take place later this year in UAE.

Indian Twitterati Heavily Slam Michael Holding For His Comments On IPL Commentary
Fans Asks David Warner “Whose Idea Was It To Drop You?” Warner’s Reply Will Make You Respect Him