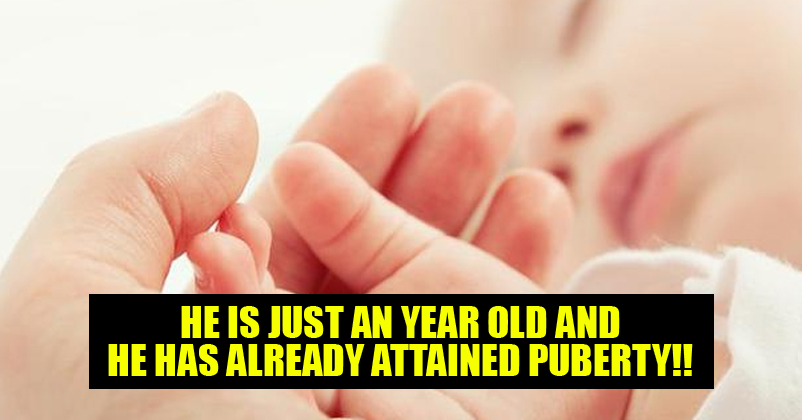 Would you believe if we say that 1-yr baby boy is discovered with fully grown reproductive organs just like any mature guy?

Well, you might not consider it true or this may seem hard to believe at first but 1-yr Vaibhav (changed name) is diagnosed with early puberty or precocious, a rare condition. He’s being treated at Delhi’s super specialty hospital presently.

When the boy was just 6 months old, his parents observed alarming changes in his physique. He was taller as compared to other kids of the same age but what’s more remarkable is that Vaibhav’s reproductive organs began to grow in an abnormal way.

As per his mother, “We thought maybe he was just a big baby, so we did not take him to the doctor. But by the time he was one, it was apparent there was something wrong. My mother-in-law, who has taken care of several children in the family, also said that his growth seemed unnatural. That is when we took him to the doctor.” At the age of 1.5 years, they took him to a doctor for medical checkup and at that time, his height was 95cm which was 10-15cm more than other kids of his age. Not only this, he had hair on body as well as face, had completely grown reproductive organs and voice began to break too.

According to paediatric endocrinologist, Dr Vaishakhi Rustagi, “His testosterone levels were exceptionally high, as high as that of a 25-year-old, because of which he had started experiencing physical changes. Since he was so young, he was not able to understand what was happening. He would experience s*xual urges too.”

As far as his testosterone level is concerned, it was 500-600 ng/dl while the testosterone level of 1-yr boy is 20 ng/dl commonly. It’s an extremely rare condition for his age and as per his doctor, just 1 toddler in 1 lakh suffers from this. In his words, “It is a rare case that happens once in 10 odd years. Precocious puberty is traumatic for a child of his age. The baby can’t express his feelings or understand what is happening to him, while his parents are left confused.”

Injections are given to Vaibhav every month to block hormones’ effect and later on, it would be decreased to once in every 3 months until he reaches the age of 10-11 as by that time, he would be prepared for accepting physical changes. Expenses of his medication per month are Rs. 11,000.

As per Dr. Rustagi, “If such children are not treated, they will become violent. The physical changes will not be suitable for their age. They will also stop growing after a few years and remain about 3-4ft tall.”

Calm Down Guys! “Udta Punjab” Is NOT Banned By Censor Board
Man Ends 48-Hrs Marriage For The Most Disgusting Reason! You’ll Hate Him After Knowing It