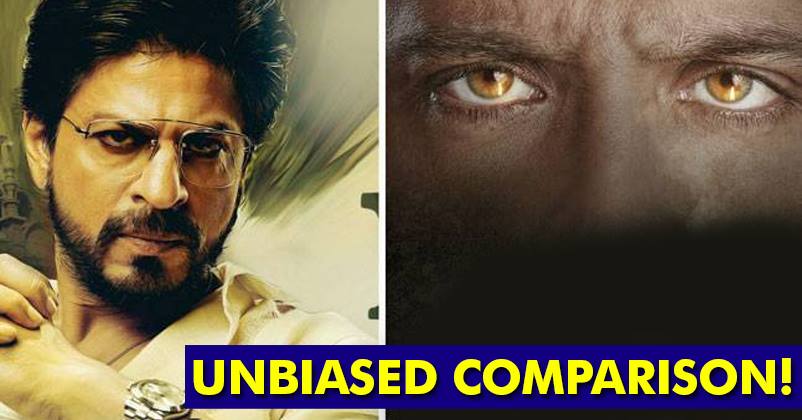 It was not just Rakesh Roshan who felt agitated and left out when the screen sharing of Raees and Kaabil were left to 60/40, but a majority of Hrithik Roshan’s fans went through the same. But when Kaabil was more critically appreciated by various critics, it was Shahrukh’s Fan club who claimed the reviews to be fabricated. But today, RVCJ is about to give an unbiased comparison between Raees & Kaabil and an answer to all those who had been shouting in the comment section of our page claiming that we were endorsing and promoting only a particular movie.

So here are some points which will help you to analyze these two movies in a better way.

1. Raees is a heavy action packed drama movie. Yes, we do have actions in Kaabil but the intensity of stunts is way more in Raees. Having said that, the award for actual romance should be given to the couple – Hrithik Roshan and Yami Gautam. People may call Shahrukh Khan as the king of romance (which is true), but it’s a story that makes a movie romantic and not the actor or actress as he or she has to perform according to the character assigned to him or her. 2. Kaabil movie’s dialogues aren’t that strong and firm as compared to that of RAEES’s. Kaabil movie features just a couple of dialogues that were worth noticing while it was the Raees movie that made everyone recite all of its dialogues just so as to get the actual feeling of it. 3. It is now Hrithik Roshan’s extraordinary efforts in KAABIL that has set his standards high as compared to the kind of hits that he had been giving over the past years. However, SRK’s acting in the movie RAEES was still commendable but not up to the mark as compared to what he had previously contributed in Bollywood. 4. KAABIL movie was way too predictable where it was obvious that Hrithik would go for the vengeance. But it was the banter between Raees and Nawazuddin Siddiqui’s characters that kept the audience on its feet to keep them guessing about Raees’ next move to get rid out of the situation and problems raised by ACP Majumdar. 5. Kaabil seemed to be more of a practically possible kind of movie where a person indeed struggles hard to fight against the villain, unlike Raees who happens to beat 20 people all at once. Hrithik Roshan’s character of a blind man fighting wasn’t mistaken to be like Daredevil’s one and he indeed took serious injurious before taking his revenge by killing his enemy.

6. The catch of the movie or the surprise element in Raees way more better than that of Kaabil’s. We all expected a perfect encounter of Raees by the entire police force but it was SADIK (Raees’s friend) who helped his ‘BHAIJAAN’ to know about the entire situation. Meanwhile, in the movie Kaabil, the only reason why the police couldn’t catch Hrithik was because the man who could identify him was a blind man himself. 7. So these were some of the points that I feel were worth considering to help you choose the best one between them. Yes, I know, I should have written – SPOILER ALERT at the very beginning, but ultimately at the end of the article, you are going to choose just one over the other, hence just simply miss the second one.

What are your views about the comparison? Many people on our Facebook Page accused us that we were partial towards a particular movie. I guess the nature of this article might help them to understand. Please share your opinion the comment section below.

“Jolly LLB 2” – The Last Comedy Scene Of The Film Is Copied From This Video! Check Out
Shocking! Here’s How Much Kareena Kapoor Charged For Her TV Debut!