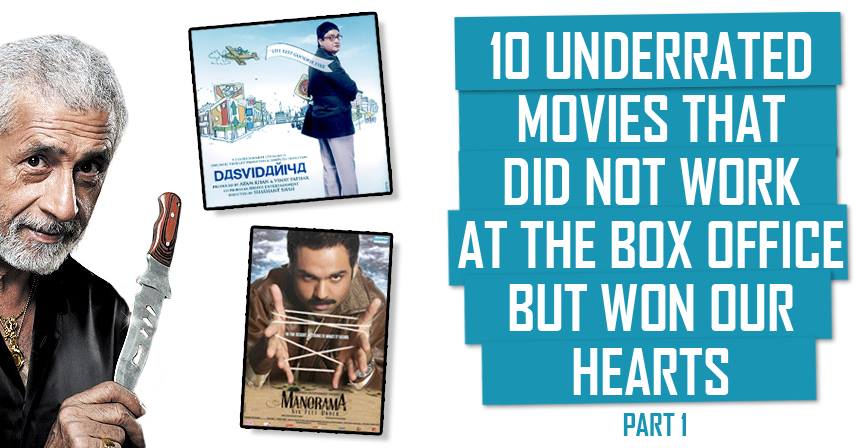 Getting commercial success in the Hindi film industry is a very, very hard task. You need to set aside a major chunk of money for marketing and promotion. This is not a viable option for all producers since, more often than not, they are on a shoestring budget. Here are 10 movies that may have not worked in the box office, but they did win over us!

An extremely well made film starring Manoj Bajpai and Ravveena Tandon. Shool is about an honest and diligent police officer whose whose only con is his pro as well, honesty. The movie was made on a minimal budget and did not earn much but left a mark on viewers with its powerful narrative. Directed by Ram Gopal Varma back when he was in his prime, Kaun is a psychological thriller revolving around a young girl who’s staying alone in her house. The direction is brilliant, the story is well written(written by Anurag Kashyap) and Urmila is in top top form! A very good movie that was not commercially successful. Starring Shiney Ahuja, Chitrangada Singh and Kay Kay Menon and directed by Sudhir Mishra, the movie revolves around a love triangle in the middle of a political nexus. A stellar star cast consisting of Abhay Deol, Gul Panag and Raima Sen. A very well made film with a lot of layers that is sure to leave you spellbound. An extremely well made crime thriller with a huge cast. The actors do their bit extremely well. The direction is top notch. A must watch. Mithya is a class apart. The film has so many layers to it, you will definitely enjoy it. Ranir Shorey with a performance of a lifetime. Beautifully made. A simple little movie which will leave you teary eyed, Dasvidaniya is about a common man who has a few days to live, but he wants to do some things before he breathes his last. An emotional roller coaster. Vinay Pathak is the star of this one! Paresh Rawal in a triple role done brilliantly! Abhay Deol as the suave thief. A movie that shows the life of a “superchor”. Amazing direction and awe inspiring acting. A budding lawyer gets himself into the dirty world of politics and sees everything that comes with being a politician. Kay Kay Menon is the hero of this one! His dialogue delivery will leave you wanting more! This is only the first part of this list! A second part will be coming soon. Comment and let us know movies that you found to be awesome but didn’t get its due recognition. 🙂