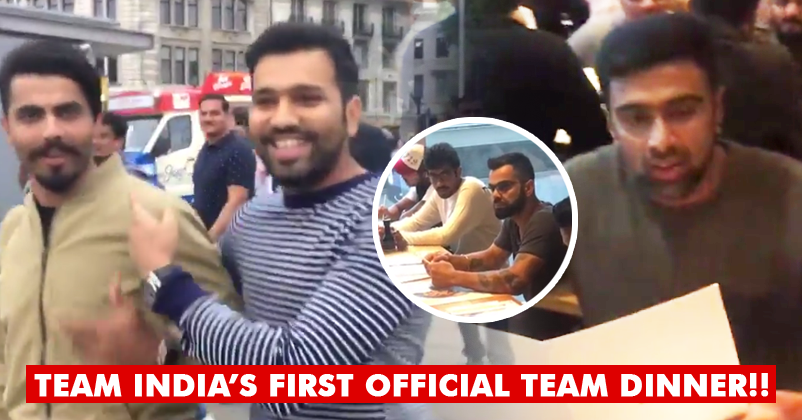 Today, we are here with Indian Cricket Team’s exclusive video of their first official dinner together. I will walk you through the video in detail.

The video starts with Rohit Sharma, introducing himself and is seen as the host.

Here’s is what he said,

Guys, I am Rohit Sharma, from Team India and this is our first official Team dinner. As you can see, the guys are here, and I am gonna take you somewhere where not many people have been. So, FOLLOW ME!

As the video continues, the whole team walks on the streets of London, followed by many fans. Rohit introduces Jadeja, Kedar Jadhav to the camera. He introduced a few more names, but their faces were not shown in the video.

Then, the entire team goes inside a Restaurant, where they were supposed to eat (Wagamama).

As soon as they go inside, Rohit tells about the place which looks decently crowded. The Team settles down to order and Ashwin is seen ordering a salad, while Rohit teased their fitness trainer.

Next, comes my favourite part; it’s when the food arrived. One of the support staff gave a long explanation about the food, which was already looking great and he described it very beautifully, leaving me hungry.

Then the whole Team comes out of Wagamama, and Rohit Sharma is seen smearing his stomach while coming out. That speaks about the dinner. At the end of the video, Rohit says that he enjoyed it a lot, and that he would love to do it again before he signed off the video.

The video is a great treat for cricket fans. It takes you very close to your favourite cricket stars, while we get to see their unseen sides. If you are a cricket fan and would love to see your stars off the field, then you will definitely love this video.

Is This Player The Reason Behind Bitter Relation Of Kohli & Kumble? BCCI Finally Breaks Silence!
Abhishek Bachchan Is All Set To Give A Tough Competition To Salman Khan’s “Tubelight”! Here’s How