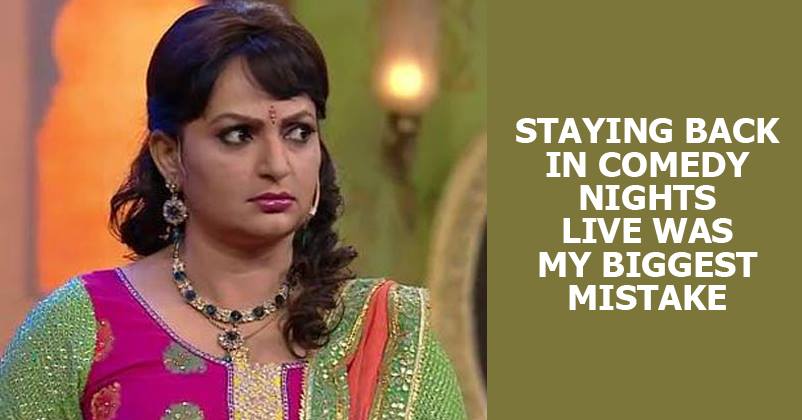 Owing to differences with production house, Upasana Singh, who was seen essaying the character of Bua in ‘Comedy Nights Live’ has bid goodbye to the show. The other team members of ‘Comedy Nights With Kapil’ decided of supporting Kapil Sharma and joining him on his new show on Sony ‘The Kapil Sharma Show’, but Upasana Singh was the only person who decided to stay back and join Krushna Abhishek’s team. Now, it seems Bua is pissed off!

On being asked as to why she quit Comedy Nights Live, Upasana said;

“There is no comedy in the show. The work atmosphere is highly unprofessional and I regret working with this production house. It is the biggest mistake of my life.” Then she talks about the issues with production house and says that they didn’t give her contract for 4 months and after it came, it was filled with unreasonable clauses. She also mentioned about a clause which stated that her services on the show could be terminated within 24 hours and that she doesn’t have the permission of joining any other comedy show. Upasana adds “They treated me like a puppet where I had to only listen to them.”

Upasana had an issue on creative lines too. When she contacted the team, they promised Upasana that they will find another writer for her and would give her good punch lines, but this didn’t happen at all.

Talking about payment issues, she says,

“They have paid me for just two episodes. They had in fact promised to pay every 30 days. They did not fulfill that promise. Now they are saying they will clear my dues only after I sign the agreement. Clearly, they want to trap me. But I want to tell them, that they can’t stop my payment. I will drag them to court. You can’t do this to an actor.”

Talking about her relation with Krushna Abhishek and Bharati Singh, Upasana says;

Then reporters asked her whether she would be joining ‘The Kapil Sharma Show’, on which she replied;

“I don’t know. I am not leaving this show to join Kapil’s show. There, too, I will join only if there are proper terms and conditions fulfilled.”

So guys, what do you feel, will she join ‘The Kapil Sharma Show’? Do let us know your comments in our comments section below!

Meet this Man Who Fooled 2 Lakh People Overnight On Social Media By Posting This Prediction!
Bill Gates Is Smart! This Is What He Will Do If He Has To Survive On Rs 100 Per Day!