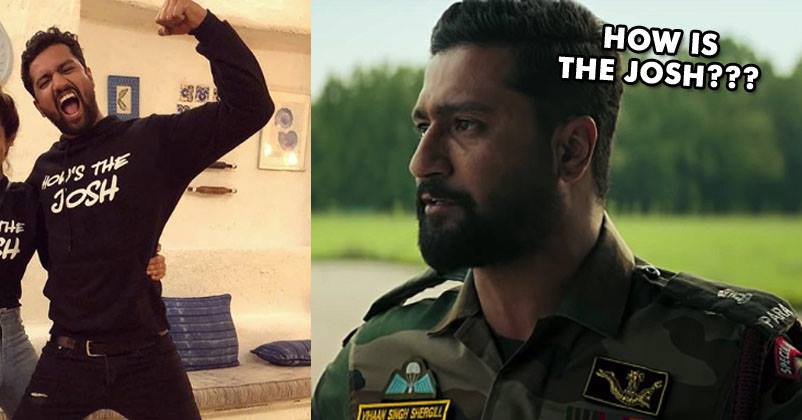 This year opened big for the Bollywood Box office, as the very first release of the year Uri became a massive hit. 2018 was very much promising for our current favorite Vicky Kaushal.

With good film content he made a mark with the critics as well as with the masses. His Raazi and Manmaarziyaa was applauded by all.

Uri:The surgical strike became an instant hit among the audience, everyone loved how the josh was high for every character, portraying such details with utter dedication and hard work.

Recently, the cast and crew members of the film celebrated the film’s success with happy hearts and uncontrollable energy to be precise. Everyone was wearing t shirts with ” How’s the josh?” written on them.

Mood, when I know he’s got my back. Mera director, mera bhai! @adityadharfilms #URITheSurgicalStrike #HowsTheJosh Thank You for all the Love! 🇮🇳❤️

But, amidst all these celebrations, you surely cannot miss one person who is also wearing the same t shirt and beaming with excitement and joy alike.

Yes, we are talking about television actress Harleen Sethi, whom Vicky Kaushal is rumored to be dating. Though both of them never confirmed it, but surely there is something we all can see.

So, after Harleen posted this picture herself, we can say that here the josh is definitely high, and we are so waiting for more cute pictures of them together.