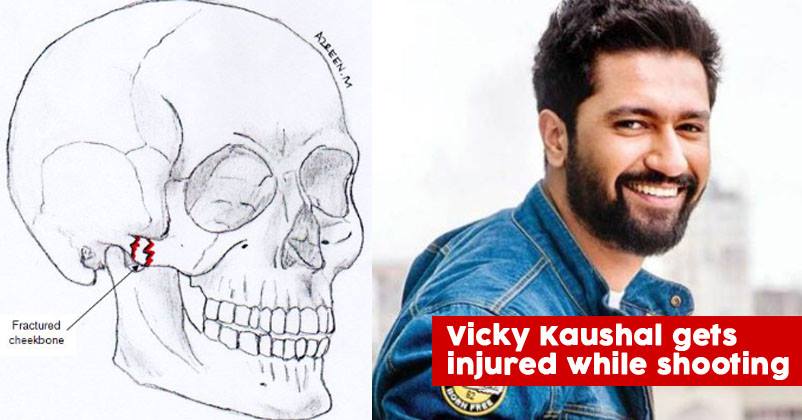 Vicky Kaushal who is currently in Gujarat shooting for his upcoming film directed by Bhanu Pratap Singh, he was shooting for an action sequence inside a ship for the untitled horror flick and got injured.

#Uri emerges as 10th highest grossing Hindi film ever! Thank You for all the love and congratulations Team! 😊


Uri sensation star has reportedly broken his cheekbone and got 13 stitches. According to the report of Mumbai Mirror, the actor was required to open the door and run in a night sequence, but accidentally the door fell on him leading to the injuries.


Vicky was rushed to the nearby local hospital by the crew members of the movie where he got 13 stitches on his cheek and the actor later returned back to Mumbai. He will be consulting a doctor in Mumbai for further treatments.

Vicky Kaushal gets injured while filming an action sequence… Shooting for director Bhanu Pratap Singh's horror film in #Gujarat… Vicky fractured his cheekbone and got 13 stitches on his cheek.

The untitled horror film also stars Bhumi Pednekar and this is the directorial debut of Bhanu Pratap Singh previously he was working as an assistant director of Shashank Khaitan.


After the tremendous success of his last commercial movie “Uri – The Surgical Strike,” which is the biggest hit of Vicky’s career and the highest grosser of 2019.


The actor has quite a few projects in his hand and we wish him a speedy recovery from the injury so that he can be back in the business doing what he loves the most.

Alia Tells How She Was Cast For Brahmastra, Tells She Pleaded Ayan To Cast Her Opposite Ranbir
Hrithik Roshan’s Workout Video Impresses Ex-Wife Sussanne, Here’s How She Reacted