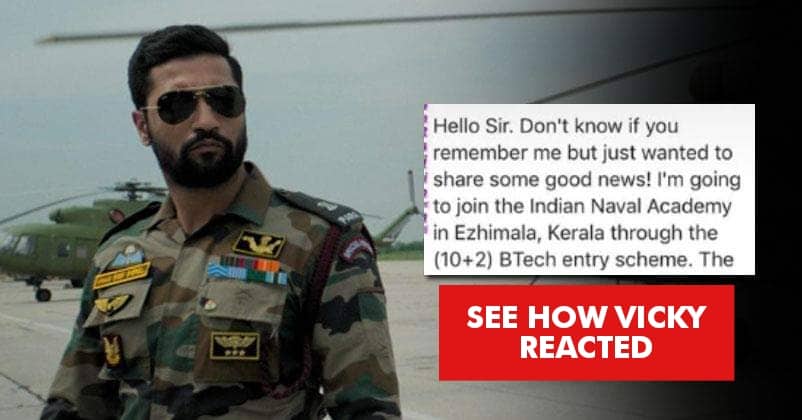 The Indian film industry is a great source of entertainment for public but nowadays people like to see not just masala entertainers but also those movies which are based on biographies and real incidents. Sometimes we get to watch such flicks that are an inspiration for everyone and Vicky Kaushal starrer “Uri: The Surgical Strike” was definitely a masterpiece.

Along with Vicky Kaushal, Yami Gautam and Mohit Raina played lead roles in “Uri: The Surgical Strike” which went on to become the first blockbuster of 2019. Directed by Aditya Dhar, the movie was loved by audiences and critics and crossed the 200 crore mark within few days of its release.

However, what makes this flick more special is its effect on the audience, especially youngsters. One young fan was so moved after watching “Uri: The Surgical Strike” that he decided to join the security forces and he sent a message to Aditya Dhar Films on Instagram after getting selected in the Indian Navy. He is going to join the Indian Naval Academy in Ezhimala and after 4 years of training, he will be commissioned in the Indian Navy.

Here is the message which was sent by the youngster,

“Hello Sir. Don’t know if you remember me but just wanted to share some good news! I’m going to join the Indian Naval Academy in Ezhimala, Kerala through (10+2) BTech entry scheme. The training commences from the 15th of this month for 4 years and after that I’ll be commissioned in the Indian Navy as an officer.

Sir, your movie in its essence has immensely motivated me to join the forces and I can only imagine so many other people like me who got similarly motivated. Thank you for making such a masterpiece for it will remain forever in our mind and spirit. Wanted to share this news with you before I started this journey as I truly felt inspired since the time I have watched Uri.”

The emotional message was shared by none other than Vicky Kaushal with the caption, “This is what makes all our efforts worth it. Wish you the best buddy, Jai Hind.” 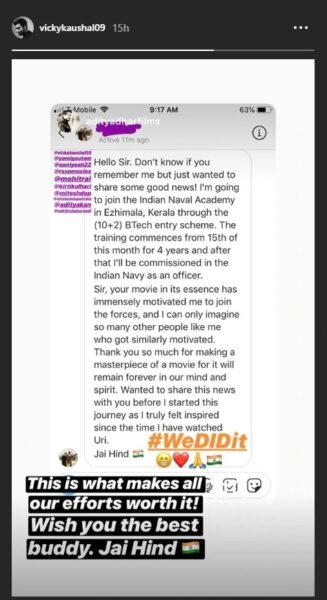 We also offer our best wishes to the youngster and hope that Bollywood keeps on coming up with such nice movies.

Vijay Deverakonda Was Asked If He Has Watched Kabir Singh. His Response Was Savage
Pakistani Star Shaan Shahid Bash Shah Rukh Khan For His Voiceover In Lion King, Gets Badly Trolled