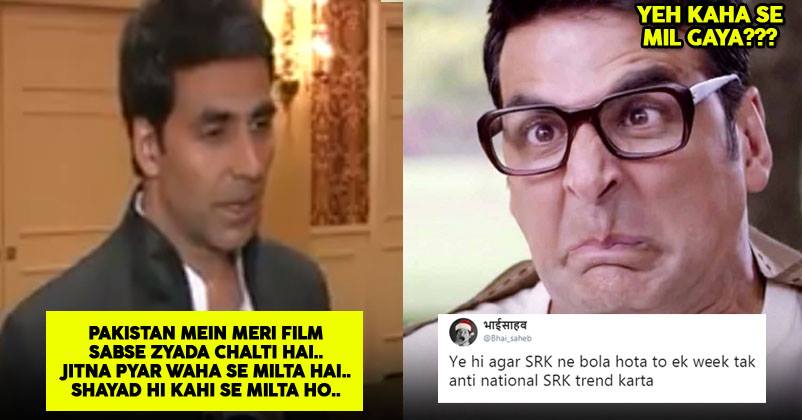 Bollywood throughout the years saw movies of different genres and actors performing in them giving spectacular performances. Superstar Akshay Kumar is one who gave outstanding patriotic performances to remember him by.

Recently, an old video suddenly surfaced on the internet, where Akshay Kumar is saying that the people of Pakistan love him very much, because of whom his films are more popular there.

This angered people all around and they slammed him saying this is some kind of political propaganda. Whereas, some also pointed out he is lucky that he is not a follower of Islam.

Check what Akshay Kumar had to say in this old video that is going viral.

After this video went viral, netizens could not keep their calm. See how they reacted.

So what's the difference between 🇨🇦🇵🇰 @TarekFatah and 🇨🇦🇵🇰 @akshaykumar ?? Both Canadian & are showing fake Indian patriotism

Been a fan of @akshaykumar since I was a teenager; back when political leanings didn't interfere in my liking of individuals. I still adore him but it's sad to see how he's been helping to further party propaganda. Also it's high time he clarifies the mystery of his nationality.

So, what is your reaction to this video?

Continue Reading
You may also like...
Related Topics:Akshay Kumar