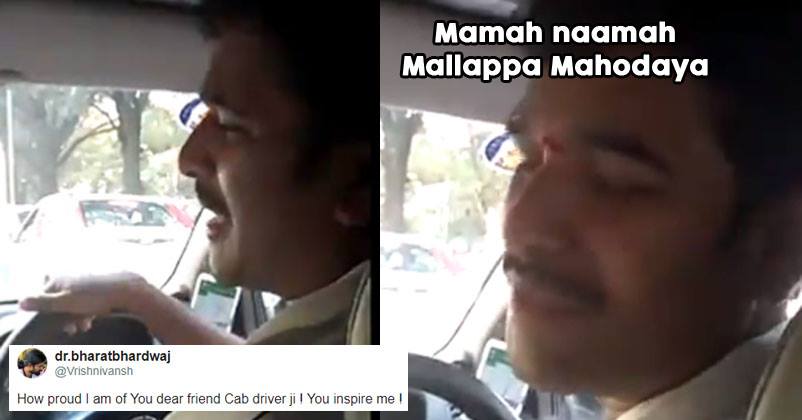 Sanskrit is the oldest language and is the mother of all Indian languages. It is the language of ancient India and all of the known books of Hindu Mythology has been written in Sanskrit. But today it is just a third language mandatory for every student till high school.

We all have learned Sanskrit in our schools but we don’t remember anything about it now. None of us do, except for this cab driver.

A video is going viral of a Bengaluru cab driver, in which he can be seen talking in fluent Sanskrit to his rider. With a sweet smile on his face, the cab driver is conversing in a very polished Sanskrit like it is his first language.

The video is making rounds on the internet and people are loving it. Twitterians are praising the cab driver and his amazing talent to speak one of the hardest languages, Sanskrit.

I could understand the conversation!!!

😍how I wish to learn to speak in fluent Sanskrit.

How proud I am of You dear friend Cab driver ji ! You inspire me !

Really awesome sir. Great sir. Actually now a days people are feeling shy to speak in their own language but speaking sanskrit that fluently is really great and Happy to see this. I also know sanskrit but not as fluent as him. Really feeling Happy after seeing this.

Get this man a shield.

Wow. That sounds beautiful. I hope the schools taught Sanskrit with so that it could be used as a spoken language. Although I studied Sanskrit for a while in my school, but could never imagine speaking in the language. May be the teaching pattern is flawed or I had a raw deal.

🙏to cab driver for our heritage and language skills

These Memes For Upcoming Fathers’ Day Are Hilarious And Totally Relatable
Fathers’ Day Special: 10 Ways To Show Your Dad That He Is The Real Hero