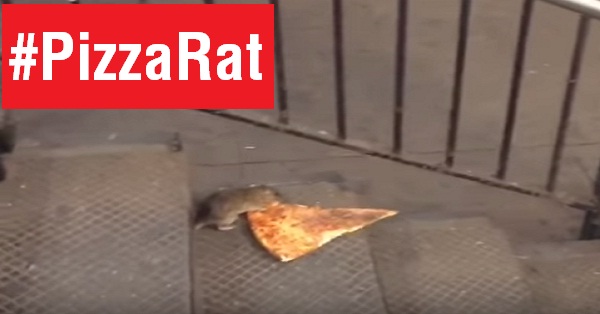 Today in the world of hashtags, every small or big event which happens takes up to Twitter or Facebook in the form of a hashtag. Similarly a hashtag #PizzaRat suddenly started trending on twitter worldwide couple of hours back. When a video footage of a rat carrying a slice of pizza into New York Metro Station surfaced on YouTube.

The video was uploaded on YouTube by New York based comedian Matt Little. This 15 seconds video have got more than a milion views within few hours. The comedian Matt Little who shot the video said, ” I think this rat symbolizes the exact way many people in New York experience life”.

Here is the video of the rat carrying pizza maybe for his whole family:


You can watch the Video directly on YouTube by clicking here.

In the meantime while #PizzaRat was trending on Twitter, a Twitter user Kurt Fraser tweeted a pic of crab with a cigarette mentioning if #pizzarat is cool then #cigarettecrab is cooler.

What do think about the video. Don’t forget to share your thoughts in the comments section below.

Continue Reading
You may also like...
Related Topics:Pizza, pizzarat, This Video Of A Rat Carrying A Slice of Pizza Into New York City's Metro Station Will Make Your Day