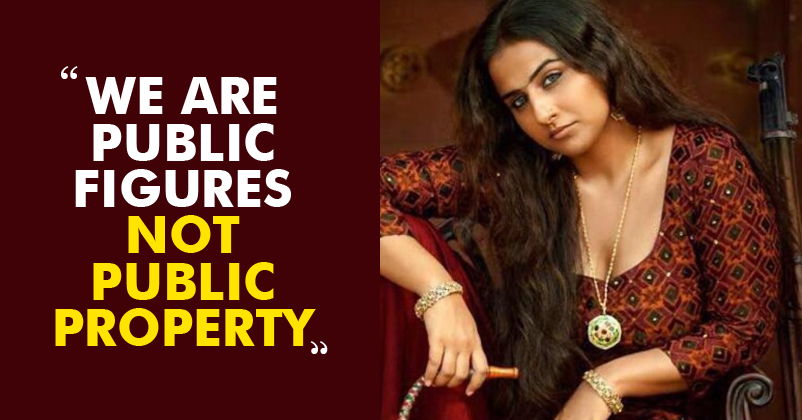 Many a times, stars face awkward situations due to their fans. Although some stars quietly adjust to such situations, there are some, who retaliate. Recent example is that of Vidya Balan who perfectly gave it back to a fan.

Yes, the actress faced an uncomfortable situation at the Kolkata airport. A fan asked Vidya if he could take a selfie with her, but when she agreed, he misbehaved with her. Vidya was at the Kolkata Airport with the director of Begum Jaan, Srijit Mukherjee and producer Mahesh Bhatt. On being asked for a selfie, Vidya immediately agreed. We all know that she’s a fan-friendly actress. However, the actual problem started when the fan put his arm around her while getting clicked and that too without permission.

As soon as the fan put his arm around her, Vidya said “Don’t”! The fan literally ignored her “NO” and continued with the same pose until the manager stepped in and asked him not to do so.

After the manager sternly instructed him, he removed his hand, but once again, when Vidya turned towards the camera, he misbehaved. Vidya felt a hand on her back and this is when she lost her temper.

Vidya became furious; she screamed “What do you think you are doing? This is wrong.”

When the fan asked her for a selfie again, she strictly said “No you can’t, behave yourself!”

Vidya walked off in anger; however, the producer and director were proud of the way she dealt with the pervert. In order to avoid embarrassment in front of the crowd, even the fan left. According to reports, Vidya was quoted as saying

“When a stranger puts an arm around you, be it a man or a woman you get uncomfortable because they are intruding into your personal space. We are public figures, not public property.”

Watch the video in which she narrated the incident;

What a bang-on reply! We are proud of her; after being slammed, the fan will think twice before mistreating any other celebrity. Way to go Vidya….