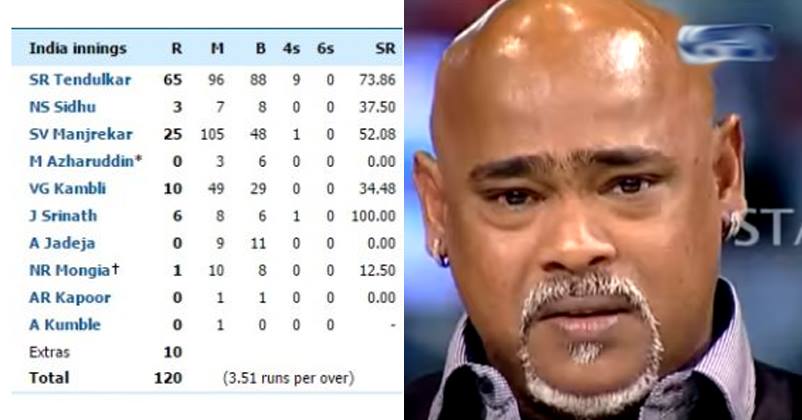 It was probably one of the saddest day in Indian cricket history, when India was all set to go through the finals of 1996 World Cup, but unfortunately it didn’t. It was believed to be the most important and crucial match of the tournament. India’s morale was already high as it marched into semi-finals by crushing their arch-rivals Pakistan by 39 runs and were looking confident enough to cruise to finals and winning the cup.

Sri Lanka lost two quick wickets at a score of one run. Both the openers were back in pavilion. But with PA de Silva’s 66 from 47 balls and RS Mahanama’s half century. Sri Lanka managed to score 251 from 50 overs with the loss of 8 wickets.

It was now India’s turn to chase down this decent total which looked easy from India’s perspective as they came down from Bangalore making 287 runs in front of Pakistan bowling lineup. Anyways everything was going fine, India was 1 wicket down with Tendulkar and Manjrekar on crease with a partnership of 90 runs.

But then something happened which certainly shattered India’s dreams of winning world cup. Tendulkar got stumped by Kaluwitharana on Jayasuriya’s bowl and then it was just a matter of few more overs. India from being 98-1 in 22.4 overs went to 120-8 in 34.1 overs with Vinod Kambli and Srinath on crease. The fall of India’s 8th wicket made the Kolkata crowd go berserk and vented their disgust by setting fire to some areas of the stand and throwing waterbottles onto the field. The match briefly stopped to calm down the crowd but nothing changed when play was about to resume. Finally, the match referee stopped the game and the game was awarded to Sri Lanka by default.

The dreams of 90 crore Indians were shattered at that moment and Kambli leaving the field with tears rolling down his face.

Don’t forget to share your thoughts in the comments section below.

Continue Reading
You may also like...
Related Topics:Claims The Match Was Fixed, Vinod Kambli Opens Up About 1996 World Cup Semifinal