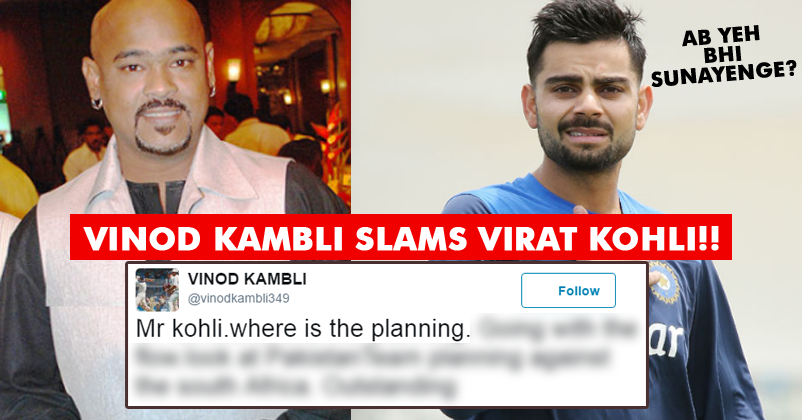 Just after an amazing victory against Pakistan, Virat Kohli led Team India, lost its second match of the Champions Trophy against Sri Lanka.

The team couldn’t win the match even after setting a difficult target, as the bad fielding and bowling worked against them, letting Team Sri Lanka take the match out of their hands. The loss was hard to accept so captain Virat Kohli and team India were criticised by many Indian Cricket lovers and former players. Vinod Kambli also took to Twitter to slam Virat. He tweeted-

Mr kohli.where is the planning. Going with the flow.look at PakistanTeam planning against the south Africa. Outstanding

Mr kohli.where is the planning. Going with the flow.look at PakistanTeam planning against the south Africa. Outstanding

There was mixed response to the tweet by Kambli. Here’s what they said-

Sir, today is a big slap to those who criticised u as crocodile tears in 1996 Semifinal #INDvsSL

Where did your life plan go??? Has been missing since 2 decades

i agree with vinod sir..terible planning and a blunder not to include Ashwin. What worth is hardik pandya ? Vinod what's your view on hardik

Match haarne se pehle bhaukne wale aa gaye! Support the team..don't ridicule for each and everything!

What kind of shit is this…..Indian Cricketer shouldn't say this….

Sir, you should apply for the coach post. We need people who can apply themselves in these pitches and score freely like you did.

Every one can have an OFF day!! So just relax

Kohli is a great player n fighter though I believe he needs to control his emotions in the ground n stay calm .I'm sure he will bounce back

Well, we think it’s too early to criticise a player like Virat, who has led the team towards number of victories. India is set to play its next match on 11th June against South Africa and we are sure Men In Blue and of course Virat will bounce back with even more force. There is a complete series of matches scheduled in coming days and we believe Team India will not let the “Mauka” go out of hands this time. What do you say?