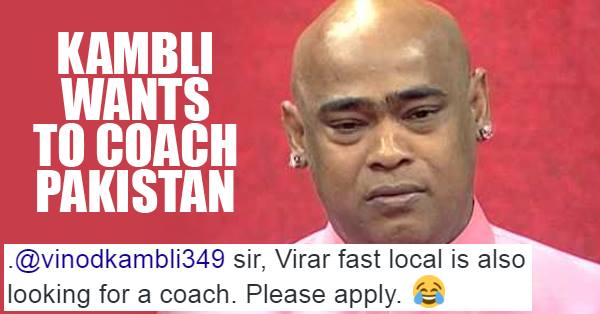 Vinod Kambli, the former Indian cricketer has been trolled on the Internet after he expressed his wish to coach IPL teams and then Pakistani cricket team. The left-handed batsman tweeted that if players like Wasim Akram can become coach of IPL teams, then he can also coach any IPL team and Pakistan team too.

This is what Kambli tweeted:

Kambli’s cricketing career was not a long one; however a lot was expected from him since he was a close friend of legendary cricketer Sachin Tendulkar. What’s more, he was also trained by the same coach who trained Sachin. Kambli started his international career almost at the same time with Sachin but wasn’t able to handle the attention and fame that he was getting and lost his way. Twitter just can’t stop trolling him for his tweets!

Apply for a train coach:

When will you grow up Kambli?

This Guy @vinodkambli349 prove even years of International Cricket wasnt enough to Grow him up mentally .Pak still ahead India head 2 head

Are you on weed?

@asmashirazi they are looking for head coach not a dead coach?🙊

Kambli has also been criticized earlier when he targeted Sachin but to be very honest, Kambli is rarely taken seriously and it will be a big surprise if he is called by the Pakistan Cricket Board.