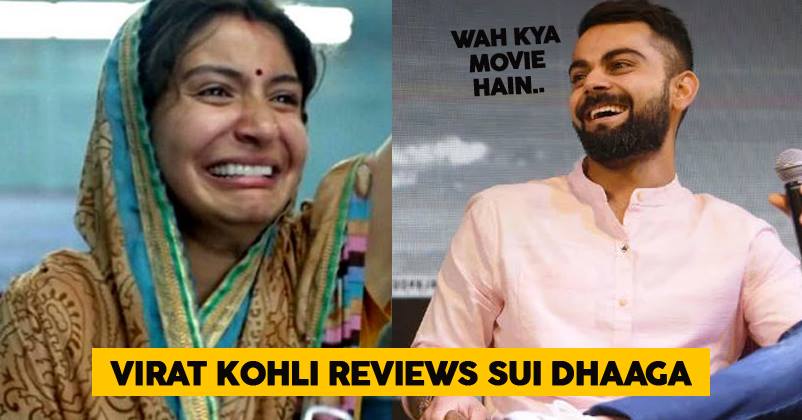 Sharat Katariya’s “Sui Dhaaga” starring Anushka Sharma and Varun Dhawan in lead roles has been making headlines ever since its trailer got released. It became the talk of the town for all hilarious reasons as various memes started flooding on social media, trolling especially Anushka for her expressions and dialogues in the trailer. 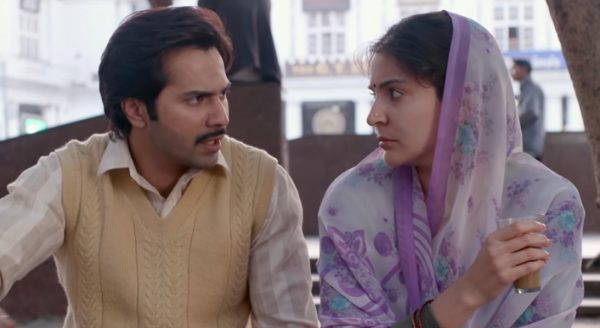 The flick finally hit the theatres today with rave reviews from B-Town as well as viewers. However, there is one review that is going viral as it’s from a prominent personality of the country! We are talking about none other than Virat Kohli, the Indian cricket team skipper and husband of actress Anushka Sharma.

There is no denying the fact that Virat and Anushka make an adorable couple and while the actress is a fan of her husband’s blasting performance on field, he is also a great admirer of his ladylove’s acting and movies. 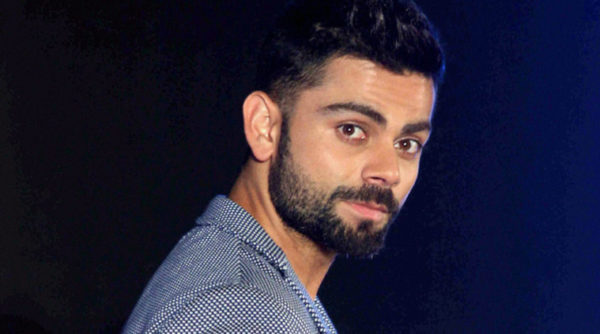 Virat took to the micro-blogging site Twitter and in a couple of tweets, he told fans how much he loved the movie and its star cast. Amazingly, he watched the film twice and loved it more the second time. The Indian skipper praised Varun Dhawan but said that the character of his wife stole his heart.

His first tweet read, “Saw SuiDhaagaFilm for the second time last night and I loved it more than the first time. What an emotional rollercoaster with brilliant performances by the entire cast. (1) #SuiDhaagaMadeInIndia”

Saw @SuiDhaagaFilm for the second time last night and I loved it more than the first time. What an emotional rollercoaster with brilliant performances by the entire cast. (1) #SuiDhaagaMadeInIndia

In his second tweet, Kohli wrote, “Mauji was superb Varun_dvn. But Mamta’s character stole my heart totally. Her ability to be so quiet yet so powerful and impactful makes you fall in love with her. SO PROUD my love ❤😍 AnushkaSharma . Don’t miss it guys! #SuiDhaagaMadeInIndia”

(2) Mauji was superb @Varun_dvn. But Mamta's character stole my heart totally. Her ability to be so quiet yet so powerful and impactful makes you fall in love with her. SO PROUD my love ❤😍 @AnushkaSharma . Don't miss it guys! #SuiDhaagaMadeInIndia

This is how celebrities from film, TV and cricket industries tweeted about the movie:

I loved Mamta @AnushkaSharmaFC I loved loved Mauji @Varun_dvn and the entire family of #SuiDhaaga … @Sharatkatariya what a beautiful film you have made. Every performance every beat is on point. And that background score is beautiful! @Shanoozeing Wat brilliant casting! ❤️

Watched #suedhaga and loved it ! @Varun_dvn is so good as MAUJI and @AnushkaSharma I am a Fan . It was such a tough one to pull this off . Kudos . All the best team !!!!

#suidhaaga is a must watch . A big congratulations to @anushkasharma @varun_dvn and the entire team . Mamta and Mauji #sabbadhiyahai 👍 https://t.co/28IGPKmENt

Just saw #SuiDhaaga …I loved it , simple and nice ..Brilliant performances by @Varun_dvn and @AnushkaSharma ..u guys are #Mauji and #Mamta …@Sharatkatariya sir 👍👍👍

Before “Sui Dhaaga”, Sharat Katariya came up with some powerful and interesting projects like “Dum Laga Ke Haisha” so viewers naturally had high expectations from this flick. Let’s see how it performs on the box-office.

Kapil Wished Sunil Luck For His Film “Pataakha”. Fans Will Love Sunil’s Reply
Anup Jalota To Exit Bigg Boss 12 House? What Will Happen To Jasleen Then?