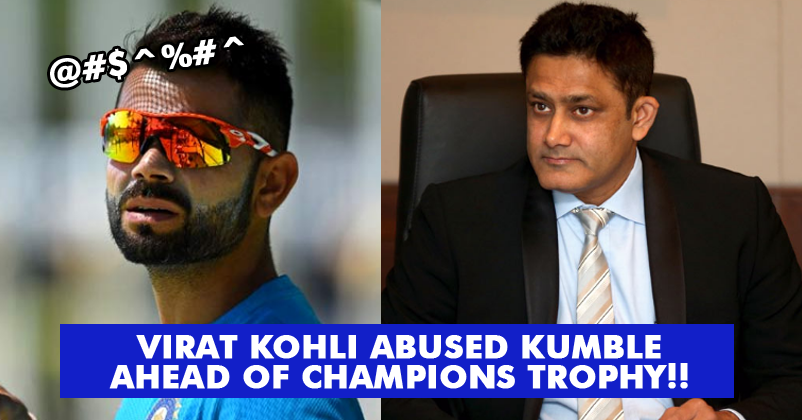 Kumble’s resignation as the head coach has come as a shocker for fans. Media channels and newspapers had already carried enough reports about difference of opinion between Kumble and Kohli, but no one knew what the exact issue was.

A fresh report has surfaced online and it highlights an issue between the captain and the coach just before the final. Sources say that there was a difference of opinion between Kohli and Kumble about batting after winning the toss. Usually, in team meetings, everyone decides whether they need to bat first or bowl first in case they win the toss. Now, during the discussion, Kumble said that if India wins the toss, the team should bat first, but Kohli went against him and insisted on batting second.

Some sources also said that Kumble always used to pull up players for lack of intensity and indiscipline; once again, Virat was against it as he believed that the atmosphere is spoiled and insecurity is created.

One more shocking revelation has been made in this regards; apart from the difference over batting first, it is said that Kohli even abused Kumble. This happened in a team meeting that was held 2 days before the final. The duo got involved in an argument and when things became worse, Kumble was abused by the captain.

Virat also told him that even other cricketers of the team didn’t want him to continue. This made Kumble furious, after which he said, “Enough is enough”. Do you think these reports are true? Since there’s no official confirmation on this, we can’t really rely on these reports, but yes, there’s a possibility that these incidents might have actually happened.